"I'm a three-pin plug living in a two-pin world", a character declares in Hwee Hwee Tan's novel Mammon Inc., lamenting her inability to blend into either eastern or western culture. It's a metaphor that proves apt in the case of Jeanette (Nettie) Peh, a savvy Singaporean girl who gives up a place in law school to pursue an acting career in London. Her attempts to fit in backfire, forcing her to confront her own identity.

Actor Jo Tan's debut full-length play Forked touches on something that will resonate with any Singaporean who has spent time abroad. How do we want to be perceived by the outside world? To what extent do we ape the ways of those around us and forget who we really are? 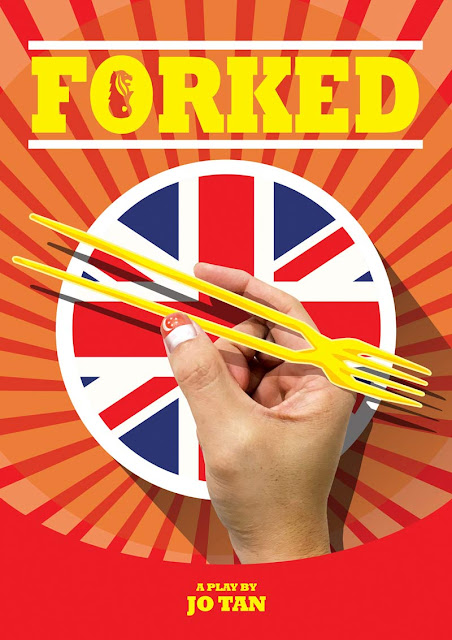 Nettie is presented as someone who's clearly uncomfortable in her own skin, preferring to project a chic international image. She documents her life on a YouTube channel called Stage Whispers in a breezy American accent. Arriving in London, she affects a crisp British accent and corrects the grammar of the local students. She's especially keen to distinguish herself from China student Yan Yan who prances around in a tacky Hello Kitty tracksuit and feeds everyone homemade fried rice, not realizing that people view her as just as much of an outsider. It takes a withering French drama teacher to expose her phoniness and challenge her to finally be herself.

Even in London, the place where Nettie is so keen to sink her roots, we find out that people are far from who they seem. Her Greek boyfriend is revealed to be a Cypriot-Muslim who had changed his name to Scott in an effort to integrate. Her British co-worker at a café is no artsy hipster but a struggling single mother reliant on state welfare. Even Yan Yan herself is seen to deliberately milk the role of the sweet, giggling China girl, knowing that the exoticism will gain her favours. Like Nettie, these characters erect layers over themselves and are reluctant to confront their authentic selves.


There's an honest, funny and thought-provoking play buried here. However, like its main character, Forked seems undecided as to what it wants to be. The casual, sitcom-like first half sits uneasily with a deeper second half that strives for social commentary. Tan simply tries to tackle too many issues: cultural assimilation, identity politics, race relations, self-actualisation. Sudden references to Brexit and casual racism seem a half-hearted attempt to turn this personal story into a larger, political one.

Part of the problem is that Nettie's tale itself is poorly resolved. In a brilliant monologue towards the end, she refuses to pander to a cultural stereotype and reveals her authentic self before a casting director. This could have been a great place to conclude her journey of self-discovery. However, its impact is diluted by an unnecessary closing scene.

The narrative also sprawls in all directions and plods on for far too long. Caricatured sequences featuring celebrity starlet Bella Matsuda (played by Tan), a woman who relishes her Asian femme fatale status, are nothing more than filler. The repetitive Stage Whispers segments lose their impact after a couple of iterations. Tighter editing would certainly have helped.


Director Chen Yingxuan is alive to the dramatic potential of Tan's script and extracts strong, likeable performances from her cast. Ethel Yap is empathetic and funny in the central role and there is strong support by Jamil Schulze, Joanna Pilgrim and Chang Ting Wei who play an assortment of smaller characters. However, scene transitions are laboured and the action is poorly paced, making for a rather tedious viewing experience.

Forked is part of a wave of thoughtful, original Singaporean writing which taps on issues facing young people today. Unfortunately, in its current state, it feels too raw and unwieldy to form a coherent piece of theatre. One hopes that Tan and her team continue to work on it; with some polishing, this story could really make an impact.