If you're looking for a feel-good evening at the theatre, this is not for you. Yet, you'd be a fool to miss PANGDEMONIUM's superb revival of Martin McDonagh's The Pillowman, a dark, disturbing and deeply empathetic play about the power of stories to mould our lives and those around us.

In a dank, colourless room in an unnamed totalitarian state, short story writer Katurian is being interrogated. Three children have been murdered in a way that mirrors his gruesome fiction and the police are convinced that he's behind the dastardly acts. Throw in a mentally challenged brother, a horrific family history and a series of unnerving plot twists and one is reminded that truth is truly stranger than fiction. 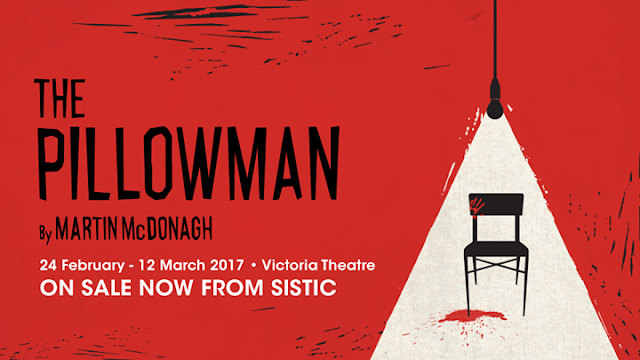 Tracie Pang directed The Pillowman ten years ago and her familiarity with the subject matter clearly shows. Despite a nearly three-hour run time, the production is excellently paced and has one constantly on the edge's of one's seat. Pang opts once again to break the play midway through McDonagh's original second act, a gut-wrenching hour and forty-five minutes that ends in murder and utter despair. Yet this intense blackness is the perfect way to illustrate how McDonagh's play is itself a clever subversion of the short stories his character Katurian is known for.

The second half opens with a re-enactment of the morbid yet strangely affecting titular story of 'The Pillowman', a fluffy creature who persuades doomed children to prematurely end their lives rather than continue their suffering into adulthood. It then marches on towards a resolution that, while far from perfect, gives us a glimpse of light at the end of the tunnel.

Central to The Pillowman is the idea of telling stories and Pang is alive to the many tales embedded within the contours of this large tale. She allows the monologues to shine and the sheer power of the words to transport us into another world. Graphic design and animation are skilfully used to add a film noir aesthetic that underscores the dark fictional world of the play. This is echoed by the almost pantomime treatment given to background scenes featuring a father, mother and child, giving us the sense of a true Gothic nightmare. Pang is aided by an astonishing creative team. Eucien Chia's stark, versatile set, James Tan's nuanced lighting and Darren Ng's unnerving soundscapes go a long way in bringing the text to life.


There are strong performances all round. Daniel Jenkins slips into the central role of Katurian like a second skin, conveying a man torn between horror at the situation he finds himself in and pride in the creatures of his fictive universe – a universe he conjures up with the sheer skill of his oratory. Andy Tear, the only member of the principal cast not in the original 2007 production, turns in the finest performance of the evening as Katurian's child-like brother Michal who simply longs to bring the world of stories to life. It's an affecting, endearing and ultimately harrowing piece of acting that haunts one long after the play ends.

Adrian Pang moves effortlessly from flippant to ferocious as self proclaimed good cop Inspector Tupolski. He has the audience eating out of his hand as he offers up, with relish, a story about a deaf little Chinese boy. As his skittish and violent sidekick Inspector Ariel, Shane Marjuki is adequate but comes across a little too eager to make his presence felt. There is also excellent support by Bright Ong, Victoria Mintey and newcomer Prudence Rivero in their small but affecting scenes.

Set against a backdrop of a deeply uncertain world, The Pillowman is an apt reminder of the danger of words and how violence only begets violence. If we promote a culture of intolerance and abuse, it's only inevitable that this would be replicated with dangerous consequences. And that is probably the best moral to take away from this story.