Yasmina Reza's 1994 play about three friends and a polarising piece of art grows richer upon each viewing. A Mandarin version by Nine Years Theatre in 2014 brought out the theme of conspicuous consumerism that is so prevalent in parts of Asia. This revival of Christopher Hampton's sparkling English translation (last staged by the SRT in 1998 and 2002) throws into sharp relief the complex nature of friendship and to what extent one feels validated by the choices one's friends make. 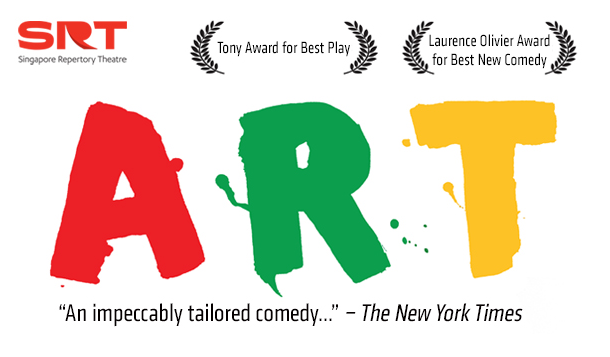 Director Danny Yeo has assembled a cast of veteran Singaporean actors for this latest outing. Gerald Chew imbues Serge, the divorced dermatologist who takes great pride in having snagged an aggressively modern, completely white painting for an exorbitant price, with an acerbic condescension that is a delight to watch. Lim Yu-Beng's Marc is all tightly-wound passive aggression as the classicist who simply cannot accept that his best friend has developed such questionable taste and loses no time in denouncing the painting as a "white piece of shit".

Rounding out the cast is Remesh Panicker as the good-natured but ineffectual Yvan who gets pulled into the crossfire between the two men and is forced to take sides when things grow personal. Panicker, reprising the role of Yvan for the third time, is a striking presence as the large yet mousy man-child who is never quite sure what to say. While he doesn't achieve the same note of jittery perfection that brings down the house in his massive monologue about domestic strife in the wake of his impending wedding, his antics break through the tension and add a strong comic vein to the verbal onslaught.

The three actors handle the material with a practiced confidence and easily command the stage though one gets the sense that they are not fully comfortable in their roles. There is an artificiality in the way the dialogue is bandied about at a breathless pace and this makes some of the orotund exchanges rather tedious. I don't think there's any harm in adopting a local setting or introducing the odd bit of vernacular - indeed, this may have brought the characters slightly closer to home.


One of the areas this production of Art excels in is in holding up the mirror to the fragile nature of friendship. Perhaps what holds a group of friends together after the passage of time is less true companionship and more the ability to achieve a consensus in world views and ideals. When these diverge, there is little to prevent the thread from snapping. The line "So here we are at the end of a fifteen year friendship" emerges as one of the most chilling of the night, reminding us of the extent to which we, consciously or not, dictate the choices our friends make and how tenuous is that link that binds us together.

Yeo's production is billed as giving a fresh spin to this intelligent comedy by staging it in the National Gallery. Yet, the venue and staging prove somewhat of a let down. Aside from the generally poor acoustics in the City Hall Chamber, one rather expects to be surrounded by other paintings, which would have lent a delicious bite to a play which riffs on artistic merit. The set, a simple sofa and chair in front of a painted backdrop, is surprisingly austere for SRT standards.

All in all, this is a decent and serviceable production of a timeless comedy about the power of friendship and the meaning of art. I'm not sure the SRT has brought anything new to the table with this latest iteration - Nelson Chia was far more successful with his crisp, elegant Mandarin version two years back - but it still makes for a terrific night out. One is guaranteed to ponder, just a little longer, the next time one encounters an interesting piece of art.