This trilogy of plays staged by the RSC last year (together with Richard II) under the banner King and Country is doing a tour of China and Hong Kong - the first time the RSC has done a major touring production of Shakespearean history in China. Much like Trevor Nunn's superb revival of The Wars of the Roses last autumn, Gregory Doran's series of productions gains tremendously by being performed by the same ensemble cast, allowing for a greater immediacy and sense of continuity as we see the story develop before our eyes. 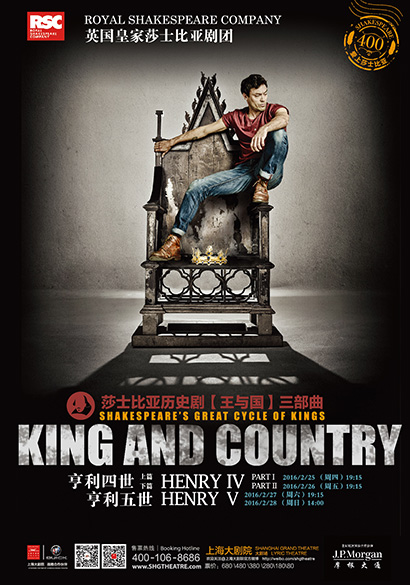 By omitting Richard II from the mix, the focus of these plays is squarely on the story of King Henry IV's son, the young Prince Hal (Alex Hassel), and his journey from playful lout frequenting the taverns of Eastcheap to wise and dauntless king. Hassel does a fantastic job in charting the transition of the character. In Henry IV, Part I, he revels as the mischievous prince surrounded by his band of roguish companions and gives us an entirely natural performance that is both likeable and compelling.

There is an easy chemistry between Hassel and his chief partner in crime, the irreverent Sir John Falstaff (a scene-stealing Antony Sher) that captures both the easy camaraderie between friends and a quasi-parental relationship that ultimately fades. The scene where Falstaff endeavours to embellish circumstances wherein he was robbed and talks himself up to the 'King' (played by Hal) and is pure comic gold. Indeed, there is a blend of both bumptiousness and pathos in Sher's Falstaff - a man who knows he is a complete good-for-nothing but yet takes foolish pride in being exactly who he is and refusing to mend his ways.

There are equally strong performances by Matthew Needham as young rebel Harry 'Hotspur' Percy with his blind, slightly comic fits of rage and Simon Thorp as the weary King Henry IV, fending of attacks to the throne and his own doubts as to his son's abilities as a capable successor to the throne.

Henry IV, Part II takes on a discernibly darker tone that moves away from the casual comedy and banter of its precursor into a more serious examination of age and responsibility. Indeed, the famous monologue where King Henry IV declares "uneasy lies the head that wears the crown" is juxtaposed with the image of the sleeping Mistress Quickly (an ebullient if sometimes unintelligible Sarah Parks), allowing us to see how the common folk sleep easily but not the King. The growing distance between Hal and Falstaff is also emphasised by their largely separate tales and  the fact that they only meet twice during the play.

Things are rounded up nicely in Henry V which can be now seen as the culmination of Hal's development: taking on the crown and commanding his men in a war against France. While one may regard the addition of the narrator Chorus (a delicious turn by Oliver Ford Davies) as somewhat incongruous when all three plays are put together, it still emphasises the crucial scale of the war and effectively sets the scene for the climactic Battle of Agincourt where Henry gives his memorable St Crispin's Day speech to his "band of brothers".


Doran keeps the narrative flowing and his scenes segue into each other smoothly and without rigid breaks, allowing aspects of the story to linger and melt into our consciousness. He is also alive to the many moments of rich comedy; the French Dauphin is played with delicious camp by Robert Gilbert and the courting scene between Henry V and Princess Katherine (Jennifer Kirby) is played has an utterly charming adolescent sheepishness that allows us to see glimpses of the young Hal behind the older and wiser war hero.

On the production front, wooden platforms and slats and the use of projections allow a variety of settings to be easily achieved and the candles lend an atmospheric touch. There is also a particularly good use of original music that lends a powerful chamber atmosphere to the plays. All in all, Doran and the RSC have delivered a truly excellent rendering of these three plays that captures the guts and glory of this unforgettable chapter of English history.