Imagine this. Malays are the majority race. They are affluent, form the government and make all national decisions. It's time for the general elections and members of the ruling Workers Action Party in Chai Chee-Commonwealth need to find a Chinese minority candidate to complete their team. Enter respected educator Catherine Seah, their answer to securing the "Chinese vote". 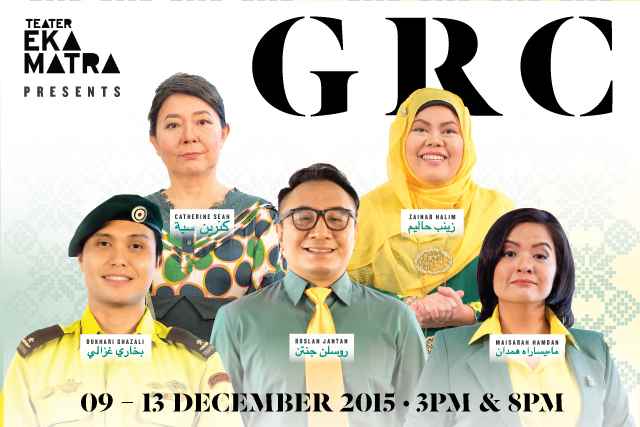 Teater Ekamatra rounds up its calendar with Alfian Sa'at's wickedly satirical Geng Rebut Cabinet, set in an unnamed country that is unmistakably Singapore. It's a play that grabs one's attention from the start and is buoyed by great acting and a compelling premise. There are luminous performances all round. Farah Ong is edgy sophistication as ambitious lawyer Maisarah Hamdan, Dalifah Shahril oozes makcik charm as bubbly grassroots leader Zainab Halim and Khairudin Samsudin proves a complete hoot as goofy, malapropism-spouting incumbent minister Roslan Jantan. Director Mohd Fared Jainal directs with crispness and coaxes the humour to giddy heights: a filmed election campaign song and group karaoke number bring the house down.

While Alfian makes cogent points about the election process, one rather wishes that his script had been a little more focused. It spurts out in all directions, seeking to check off every complaint  that has been made against the ruling political party. Gerrymandering, insincere community visits, unsuitable candidates, trashing the opposition - you name it, you have it. Unlike his critically lauded Cooling Off Day which embraced the diversity of voter's individual voices in the run-up to the 2011 General Elections, Geng Rebut Cabinet feels like an extended personal rant by the playwright, with characters making sweeping generalisations and impassioned speeches about racial politics.

There is also a sense of a monolithic "Malay" view as opposed to the "Chinese" view and this ignores the considerable diversity and dissent that may exist even within the Malay community. I would have liked to see a little more nuance in the characterisation but we are offered only slight hints of individual stories: the closeted lesbian, the hardworking but overlooked civil servant, the clueless army boy turned politician. I would have liked to hear about the voices of the Indians or other races in this version of the world; indeed, there is more to Singapore than a dichotomy between the Chinese and the Malays.

The other issue with the script is that it feels a little lopsided. The first half is almost entirely expository, focused on introducing each of the five characters and the general set-up of this parallel world run by Malays. This results in the salient issues being crammed into the second half of the play without having a chance to fully unravel. Almost without warning, we find ourselves at an election rally with Catherine earnestly advocating the advancement of the Chinese community or in a classroom where Roslan is casting aspersions on Catherine's hidden agenda and finding ways to keep her in check.

The novelty of Geng Rebut Cabinet ultimately lies in its premise and one cannot deny the way in which issues that tend to be overlooked in everyday life are thrown into sharp relief when seen from the other side of the fence. Remarks about there being one token Chinese fighter pilot every ten years and the proliferation of Malay SAP schools remind us of the casual alienation felt on a daily basis by members of the Malay community. The manner of the message may occasionally be a little unsubtle but it offers us a sobering perspective. And in this year of extreme emotions and national fervour, perspective is perhaps exactly what we need to progress as a nation.