The Necessary Stage must be lauded for being the one of the only major theatre companies today to provide an active platform for seniors to get involved in all aspects of the theatre. Its dedicated Theatre for Seniors (TFS) programme has been around for a good seven years and its graduates have performed at various community events and professional theatre productions, proudly reminding us that age is no barrier to being a great thespian.

Pioneer (Girls) Generation, written by Haresh Sharma and directed by Alvin Tan, features three of these TFS graduates. The title is both an homage to the generation of pioneers who have helped shape our nation's history and a cheeky reference to a South Korean girl group and the bonds of female friendship forged over decades by three of the lead characters. 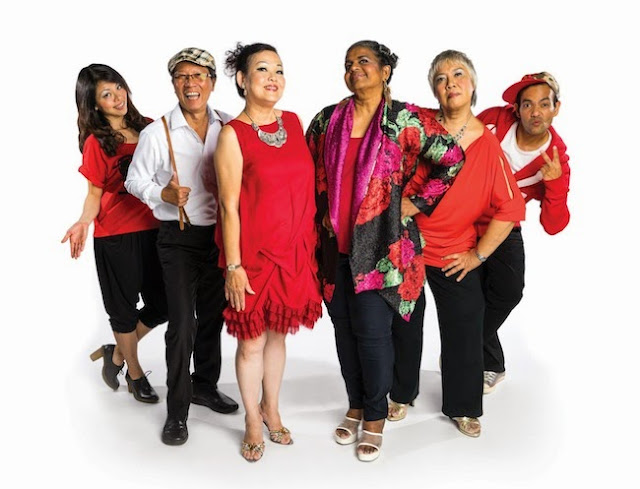 The play is set at a posh Singapore retirement home whose occupants live the sort of glamorous, insouciant lifestyles that wouldn't be out of place in Sex and the City. When the management at the home decides to raise the monthly rent, forcing one of the occupants to leave, her three friends rally together to stage a charity fundraising concert to help her with the costs.

The four lead actors bounce off each other very well and are a delight to watch; their exchanges are lived-in, lively and full of wonderful cross-cultural strains that make them instantly relatable. Padma Sagaram, last seen in The Necessary Stage main season productions Gitanjali and October, displays great comic timing as the sassy Marilyn. Stage and screen veteran Catherine Sng provides dramatic heft with her emotive diatribes. Younger cast members Dwayne Lau and Audrey Luo also provide good support in an assortment of entertaining bit roles.

Alongside the mostly light-hearted squabbling amongst the characters, Sharma offers us a glimpse into moments of quiet longing for an estranged child or a cherished loved one, reminding us that these individuals are real and ultimately human. The characters, with their fractured private lives, band together for a sense of community and comfort and the play is remarkably clear-eyed in this regard, reminding us of the importance of the love and friendships that nourish us in our silver years.

It’s certainly refreshing to see seniors being given meaty roles that are not confined to the stock parent or grandparent character. However, there seems to be an almost gratuitous desire to make the exchanges as raunchy or provocative as possible. While there's absolutely no reason to assert that these characters aren't entitled to a rich and colourful life of their own, references to pubic hair, sagging breasts and a full-blown song and dance number with the refrain "fuck you very much" are deliberately crude and, to me, in poor taste.

One also wishes that the plot had remained focused on the lives of the seniors instead of meandering into a secondary storyline about a scheming PRC woman (daughter-in-law of one of the occupants) and a Filipino retirement home manager who aim to thwart the seniors' plans for their own material gain. Certain scenes could also have easily been trimmed and the numerous interludes unfortunately give the play the feel of an insipid television sitcom or sketch comedy show.

Quibbles aside, Pioneer (Girls) Generation is an altogether fun night out at the theatre and watching this sprightly group of seniors, it's impossible not to leave without a smile on one's face. In defiantly turning its back on morbid issues like death and disease, The Necessary Stage has given us an alternative narrative on ageing that is fun, feisty and ultimately heartwarming.