Nine Years Theatre's Mandarin versions of world classics are always a pleasure to watch, a homage to fine storytelling and solid theatrical craft. In this first production of the year, Artistic Director Nelson Chia directs his own translation and adaptation of Molière's classic 1664 comedy Tartuffe. The tale is simple enough: family patriarch Orgon (Darius Tan) is so utterly taken in by the ways and words of religious charlatan Tartuffe (Hang Qian Chou) that his family is in despair. He agrees to marry his already-engaged daughter (Jean Toh) to the hypocrite and when his son (Neo Hai Bin) casts aspersions on Tartuffe's character, he disowns him without a second thought. Subsequently, his wife (Mia Chee) conspires to reveal Tartuffe's true colours to her husband before he signs away his entire fortune to the man.

Now this isn't the first time we've seen Molière on stage in recent years: in 2012, World-in-Theatre presented a colourful, decidedly whimsical version of this play titled That Clown Called Tartuffe, while HuM Theatre gave us a modern, multi-racial version of The Miser called The Kanjoos. Yet while the Nine Years Theatre production had the potential to truly sparkle and better the other two, it unfortunately proves simply too straight and safe, lacking the comic bite one so desperately needs from a French farce. 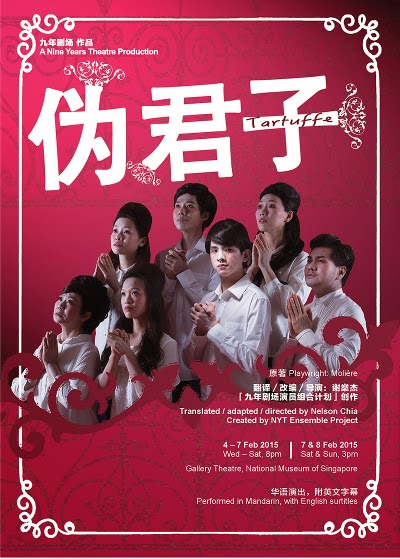 Chia directs with sensitivity and keeps the pacing tight despite the lack of an intermission. He also does a good job with the translation, clothing the play with natural, elegant Mandarin dialogue while remaining faithful to Molière's text and the original character and place names. In line with the Brechtian aesthetic Chia lately seems fond of, the actors stand in a row at the start and introduce the characters they are playing, offstage entrances and exits are witnessed clearly and the audience is constantly made aware of the fact that they are watching a dramatic construct - from having a female actress play a male role to having one of the actors playing two different characters. The light, instrumental music and minimalist set enhance the simple pared-down presentation.

A good farce is characterised by the gales of laughter that emerge from the crowds and the gradual build-up of scenes to a point of near delirium as events spiral hopelessly out of control. This version, instead, plays out like a staid Victorian drawing room comedy. A scene involving Orgon's daughter and her fiancé, where mutual misunderstandings threaten to tear the couple apart, barely generates a few titters because it is played so straight. Even the iconic scene where Tartuffe attempts to seduce Elmire in front of a concealed Orgon hardly brings the house down like it should.

The problem seems to be the fact that the actors have not really embraced the camp exuberance of the farcical form and play their roles with too much studied earnestness. One longs for a little naughtiness or meaty melodrama in their exchanges but this never comes. Jalyn Han is one of the only actors who revels in her role as saucy, sharp-tongued maid Dorine, milking her scenes for all she is worth and throwing in some very amusing facial expressions. The others do a competent job but rarely make a real impact. I particularly longed for Tan (considering his strong comic background) to exploit his character for laughs just a little more.

One also wonders whether it might have been a missed opportunity not to re-contextualise the play to a slightly more modern, even local setting. The idea of people being swayed by the words of a charismatic religious leader certainly smells familiar in our little part of the world and it would have been a nice idea to anchor this very French tale in the Singaporean milieu rather than merely offering a faithful but otherwise uninspired translation.

Finally, a quick note on the surtitles. The English dialogue has been edited and timed to perfection but it is a positive nightmare on the eyes to digest several lines of rather formal English prose in one go. I wonder whether the company might consider using a slightly more abridged text for its surtitles in future productions so that there is more time for non-Mandarin speakers to appreciate the acting.

All in all, Tartuffe makes for an entertaining evening out and one must applaud Chia and his team at Nine Years Theatre for their dedication and commitment in exploring these eclectic and challenging foreign plays. Still, one hopes that the company also enjoys themselves when presenting a play instead of merely switching the language and going through the motions. Plays such as this really only work well if they are performed with a certain cheeky abandon and there's little that would recommend them to an audience if that crucial ingredient is missing.