The Merchant of Venice


Even though it is categorised as a comedy, it’s hard to emerge from a production of The Merchant of Venice without feeling somewhat subdued. The issue of racial prejudice is strongly etched into its framework, and to many people, the play itself is synonymous with its most famous character: Jewish moneylender Shylock. Is he a remorseless villain for demanding a pound of flesh from Venetian merchant Antonio when the latter defaults on his loan? Or should we pity him as a man simply reacting to a lifetime of being scorned by an elitist Christian society? 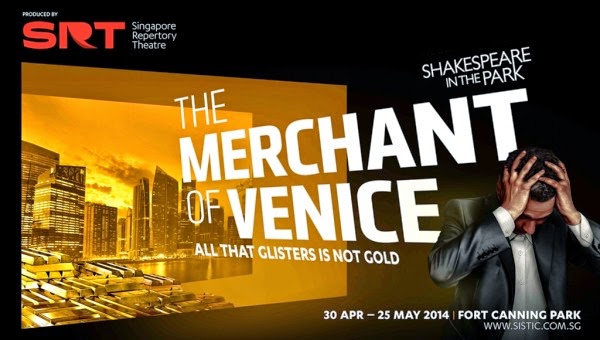 Most contemporary productions have sought to humanise the character in some way and this latest production in SRT’s hugely popular Shakespeare in the Park series lends a distinctly local angle to the text. Both Shylock and his kinsman Tubal are played by Indian actors in traditional attire, establishing a clear visual contrast from the rest of the cast. It’s a clever move by SRT's Artistic Director Gaurav Kripalani and director Bruce Guthrie that nods towards the Indian chettiars of Singapore’s colonial days. Characters mocking Shylock deliberately employ an exaggerated Indian accent and it drives home the idea of difference, giving the very real theme of prejudice in the play an added depth.

Remesh Panicker, returning to the stage after a five-year hiatus, does a terrific job as Shylock, giving us a performance that is calm, cutting and poignant. There is tremendous eloquence in Panicker’s delivery that gives the character a gravitas that lingers in one’s mind, and his richly cadenced verse is a delight to hear. Yet one cannot help but wish that more effort had been made to explore the sympathetic side of the character. The seminal "Hath not a Jew eyes" speech feels more like a tirade than a cry of emotional anguish. Shylock’s final humiliation in the courtroom, where he is forced to renounce his faith and forfeit his property, also feels underplayed. One wishes to feel the real predicament faced by this character; to feel why he acts the way he does.

This lack of sympathy in Shylock’s portrayal feels strange in light of the choice that has been made to underscore the relationship between Shylock and his daughter Jessica who elopes with the Christian Lorenzo – an act which arguably precipitates Shylock’s decision to exact revenge on Antonio. As the play progresses, Lorenzo is deliberately portrayed as an extravagant Lothario. Crucially, the final image we are left with is not one of domestic bliss but of a weeping Jessica, who has just learnt that her father has left his property to her and her new husband. Her tears are those of a daughter who has turned her back on her father and who realizes, perhaps too late, that there is truly no going back.

Julie Wee, as heiress Portia, turns in one of the strongest female Shakespeare performances I've seen in Singapore in years, eclipsing her own commendable turns as Bianca and Juliet. Wee sparkles in her scenes and has lovely chemistry with Perry Snowdon’s Bassanio. Richard Corgan gives the play some great moments of physical comedy as an ebullient Gratiano and there is also good support by Shakespeare in the Park veteran Daniel Jenkins as the casually arrogant Antonio.

Other members of the cast prove less satisfying. Uneven acting has always plagued our local Shakespeare productions and this production of Merchant is no exception. One of the chief culprits is newcomer Sean Lai as Launcelot Gobbo, Shylock’s unhappy servant, who runs away and allies himself with Bassanio. Lai piles on various antics and affectations that are evidently meant to amuse but which prove deeply unfunny. A laboured five-minute monologue where he conjures up two shrill voices in his head using socks as hand puppets is positively cringe-worthy. Isabella Chiam has barely any stage presence as Portia’s maid Nerissa, rolling off her lines with the air of a meek, monotonous secretary. And Marcus Lim's stiffness on stage in his turn as the Duke of Venice was enough to make me uncomfortable.

Director Bruce Guthrie succeeds in bringing a fresh relevance to the play by updating the setting to the twenty-first century and seamlessly integrating modern technology such as laptops and iPads into the narrative. The snazzy columns and bright lights of the set give the play a glittering, modern feel and make this incarnation of Venice not dissimilar to our own teeming island state.

Like his Twelfth Night and Othello, Guthrie evokes all three dimensions by setting scenes on both levels of the set to generate visual interest. My one cavil is his reliance on rather stagey gimmicks for entertainment. An extended prologue featuring the cast marching around in colourful stockbrokers’ jackets and barking into mobile phones feels superfluous, and the techno music that powers the play quickly starts to grate. Not for the first time, one finds that the scale of the set drowns out the very real emotions at the heart of play.

Ultimately, this is a very competent production of Merchant that is lavishly styled and has something for everyone, from stirring speeches to side-splitting slapstick. One cannot deny that SRT has created a truly phenomenal occasion for the public to experience Shakespeare. I’m especially keen to see the local angle being explored in future editions of Shakespeare in the Park – we may have something rather special on our hands.