In just two short years, Nine Years Theatre has chalked up a truly impressive selection of plays. 2012 gave us Edward Albee's modern classic Who's Afraid of Virginia Woolf. 2013 saw Reginald Rose's taut courtroom drama Twelve Angry Men. In January, we had a crisp and elegant rendering of Henrik Ibsen's An Enemy of The People and now we have this sharp, internationally acclaimed 1994 comedy by French playwright Yasmina Reza. None of these are particularly easy plays to stage but they have been deftly transposed into Mandarin and presented to local audiences to tremendous success. 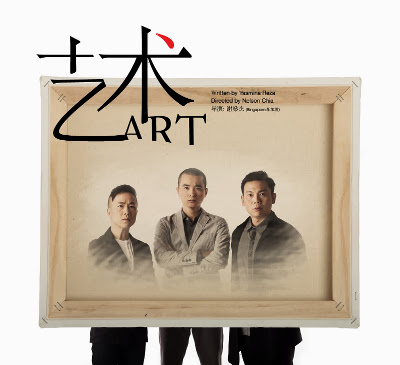 Art pits us amongst three men – classicist Marc (Peter Sau), modernist Serge (Liu Xiaoyi) and all-round good-natured guy Yvan (Oliver Chong) – who experience a rift in their fifteen-year friendship when Serge purchases a large, ludicrously expensive painting that Marc completely fails to understand or appreciate. Tensions are raised to boiling point as the two men dissect the nature of what constitutes art and their erstwhile rock solid friendship takes a thrashing as the arguments veer into personal territory. Thrown into the maelstrom and forced to take sides is the hapless Yvan, who is besieged by worries about his own impending marriage.

Reza's overarching themes of beauty being very much in the eye of the beholder and the constructed nature of both friendship and art remain both vital and relevant and her scenes blaze through with a bitter, comedic ferocity. While director Nelson Chia makes his usual choice of sustaining the narrative thrust by omitting an intermission, I was less convinced by his insistence on sticking to the original Parisian setting. The French character and place names tend to interrupt the smooth cadences of Gong Baorong's Mandarin dialogue and occasionally prove a little jarring when they are butchered in pronunciation. Seeing how universal the themes are, I wouldn't have seen any issue in relocating the play to a Singaporean or Asian setting. Indeed, one might even find a few new things to say if viewed against the backdrop of rising Chinese consumerism.

It is to Chia's credit that the rich comedy in Reza's play comes out beautifully despite all the mud-slinging that goes on and the three actors play off each other to sizzling effect. Sau lends continental finesse to Marc with his sharp suit and snide, orotund retorts – the self-proclaimed purveyor of high culture who believes his tastes in art are beyond reproach. In an early scene, the excited Serge unveils the infamous painting – a completely blank piece of white canvas with extremely faint white lines across it – and stares at his friend expectantly. After a pregnant pause, all Sau can do to diffuse the tension (and his incredulity) is to break out in loud, awkward laughter.

The other standout is Chong's Yvan. There is a wonderful empathy that Chong imparts to the character: the simple guy next door who does not want to tread on the toes of his friends but yet feels forced into a corner when he is made to express a view. His breathless rendering of preparations for his wedding when he arrives at Serge's house to meet his friend is so charmingly delivered that it earns him two separate rounds of applause.

Rounding out the play is Wong Chee Wai's sexy, minimalist set - a tasteful assortment of black, white and grey dominated by rectangular rotating flats that resemble paintings on a frame. Kudos as well to Lim Woan Wen for her work on the lighting, all dusky geometric shadows that contribute to the chic visual palette.

With Art, Nine Years Theatre has demonstrated once again their unique place in the Singapore Mandarin theatre scene by taking international plays and handling them with great sensitivity and finesse in a different language. After conquering French, Norwegian and American writing, I certainly look forward to what other works of world theatre we will have the pleasure of seeing next.