Checkpoint Theatre has struck a good balance between staging new works by emerging writers and quality revivals. Last year saw student ensemble piece City Night Songs and the 10th anniversary production of Huzir Sulaiman’s Occupation, featuring a matchless, Life! Theatre Award-winning performance by Jo Kukathas. Earlier this year, we were treated Faith Ng’s new play For Better or For Worse, a quietly affecting portrait of middle-class Singaporean marriage. And now we have this rip-roaring revival that marks the 15th anniversary of madcap Malaysian farce Atomic Jaya – a play written when Huzir was just twenty-five and last performed in Singapore a decade ago.

With its larger-than-life characters and broad comedy, Atomic Jaya is quite a change from the measured, subtle tone we’ve come to see in Huzir’s later works. Brilliant but timid nuclear physicist, Dr Mary Yuen, is stuck in a dead-end job zapping prawns for research. She’s offered the opportunity to be a part of a top secret project to construct a Malaysian atomic bomb and is swept into the throes of a megalomaniac army general, quirky colleagues and shady sidekicks, all the while battling her conscience about the implications of her dubious enterprise. 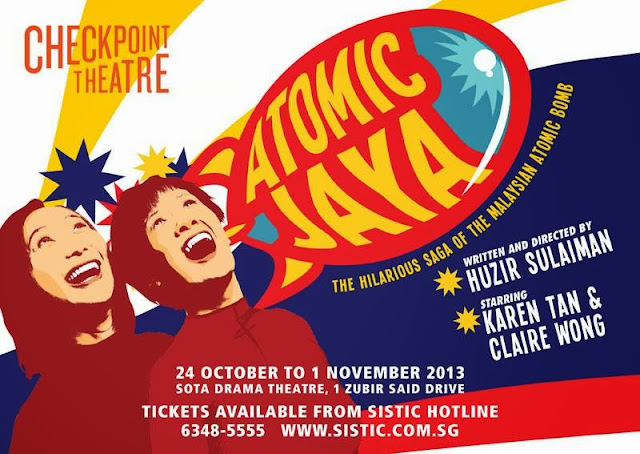 Huzir had originally written the play to be performed by one actor who takes on all 16 roles, including the lead role of Mary. It’s a monumental task for any actor to sustain and this production benefits tremendously in having the wonderful Claire Wong (who, in fact, managed this very feat in 2001) and Karen Tan, juggle the roles. And juggle they do: both play a single character by switching sentences midway and navigate the vast and varied host of characters with panache.

Wong and Tan’s excellent chemistry is undeniably the driving force of this production and they display great range and razor-sharp comic timing. Tan’s take on drugged-up uranium smuggler Otto is superb, as is Wong’s pitch-perfect rendition of a rotund Malaysian minister giving roundabout replies to reporters. Both actresses bring the house down with their energetic spiel as Chinese procurer Teng, done simultaneously in English and Cantonese. Yet placing two impersonations side by side makes one inevitably compare. Some characters are so memorably fleshed out by one actress that seeing them played again by another somewhat diminishes the impact. It’s a creative way of staging the play but it does not work all the time.

The manic role-swapping also tends to sweep the characters into broad caricature. We barely get a chance to delve behind the character of Mary, whose role as an unreliable narrator gives the play an unsettling open-endedness. The creative team could perhaps have used both actresses to suggest varying sides to her character but for the most part, she is no more than the earnest, bespectacled storyteller at the centre of the action. Focusing resolutely on the comedy may well have been the point but it detracts ever so slightly from the richer themes simmering in the text.

As always in Checkpoint productions, one is struck by the subtle production elements that elevate the narrative. Wong Chee Wai’s set and Mac Chan’s lighting give the production a minimalist - almost clinical - feel, and the only notable design element is rows of lampshades suspended in the air that are alternately raised, lowered or made to flicker. It rather reminded me of the series of chairs in last year’s production of Occupation which Jo Kukathas’s character kept arranging and rearranging to give a varying symbolic texture to the tale. The costumes, an elegant jacket and trouser ensemble with geometric patterns designed by Laichan, also add visual punch. The actresses first appear in a palette of greys, suggesting the murky intersection of truth and lies that Mary finds herself embroiled in. In the second half of the play, they wear identical outfits that are now brightly coloured, looking like court jesters presiding over a monumental national joke.

Huzir’s direction keeps the scenes moving swiftly and despite the occasional flubbed line and lack of consistency in the performances, the narrative flows very well. There is a lovely musical flourish that marks the end of the first half with a schmaltzy patriotic song about the atomic bomb, complete with a sparkly palm tree that descends from the ceiling. A text-heavy performance such as this could very easily have grown tedious and it is to Huzir and the actresses’ credit that we are kept entertained throughout.

This stylish revival of Atomic Jaya remains every bit as relevant and entertaining today as it was when written in the late 1990s. A sizzling satire of Malaysian identity and a reminder of the dangers of misplaced national pride, it certainly provides us with plenty of nasi campur for thought.