Based on the true story of a 13-year-old naval cadet who was expelled for stealing a five-shilling postal order and the father who was determined to prove his son's innocence before the rigid Edwardian courts, Terence Rattigan’s The Winslow Boy is, at once, both intimate domestic drama and a larger commentary on the rights of the citizen before the state. Both aspects are captured beautifully in Lindsay Posner’s production at the Old Vic. 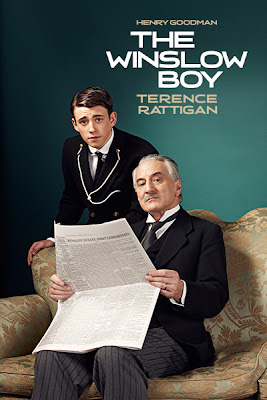 At the heart of this production is Henry Goodman's stellar performance as retired bank employee Arthur Winslow. One of Rattigan’s enduring themes is the characteristic emotional reserve of the English and Goodman captures this perfectly; a man who is not outwardly demonstrative but yet feels so strongly about the injustice done to his youngest son Ronnie (an engaging if overly earnest Charlie Rowe) that he is willing to put everything at stake to stand up for what he believes in and to "let right be done".

There is very good work by Nick Hendrix as musically-inclined elder son Dickie and Naomi Frederick as suffragette daughter Catherine whose own relationship turmoil plays out in parallel to her brother's court case. Peter Sullivan is magnetic as renowned barrister Sir Robert Morton who takes Ronnie's case, with his arrogant, orotund “Thank Yous” and the masterfully executed mock-courtroom scene at the end of Act II where we are left almost completely convinced of Ronnie's guilt. The only weak link in the cast is Wendy Nottingham as the maid Violet who feels the need to overegg her lines and make herself out as the stock comedy character; her melodramatic retelling of the court verdict at the end proved quite unnecessary. 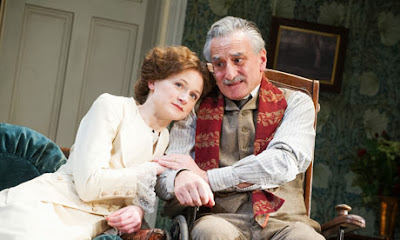 Rattigan has been lauded for his probing and prescient account of societal issues and The Winslow Boy, with its condemnation of the tabloid press and the rigidities of the law towards everyday citizens, still rings true after all these years. Where I take issue is the fact that too many strands seem to unravel from what is essentially quite a distinct story. The plodding family solicitor Desmond Curry, who carries a torch for Catherine, seems a rather superfluous character. There is the hint of Arthur's wife Grace (a quietly powerful Deborah Findlay) being unhappy and overlooked but this is never taken up in any detail. I also wasn’t sure if it had been a conscious choice by Posner to play up the sexual tension between Sir Robert and Catherine throughout the play: it only makes their final exchange seem hollow.

Peter McKintosh's handsome set is replete with an adjoining dining room, courtyard and fine period details and the stage is beautifully lit by Tim Mitchell. While there is some drag in the second half, Posner's sensitive direction keeps the play flowing smoothly and he is alive to the unexpected comedy that can be found in Rattigan's lines. We can't help gunning for the victory of this little man who takes on the world.