For Better or For Worse


Marriage. There’s no easy way to sum up that most special of bonds between two people. Emerging playwright Faith Ng, best known for her debut play wo(men), tackles this topic with honesty and bittersweet charm in this new Checkpoint Theatre production which charts the ups and downs in the life of middle-aged Singaporean couple Gerald and Swen.

The structure of For Better or For Worse is simple: we move back and forth in time, juxtaposing the present – where Gerald has lost his job and the couple's daughter has just announced her engagement - with scenes from the early days of their marriage. The pleasures and pains of everyday married life, from petty quarrels and family dramas to work crises and personal vices, are evoked through Ng’s colourful and authentic Singaporean dialogue. 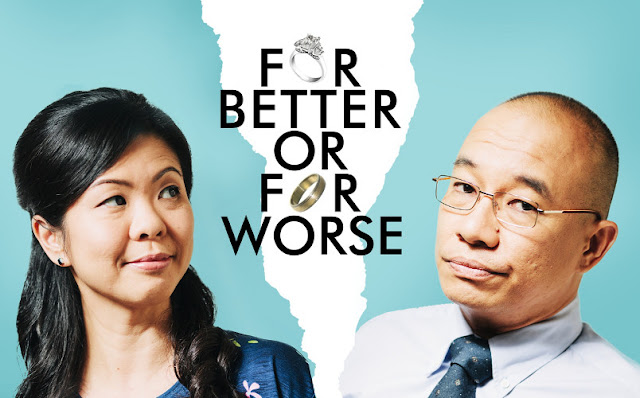 Yet, this latest effort by Ng never quite matches up in tone and dramatic trajectory to the absorbing, fully-realized wo(men). For one, the action proceeds through a series of relatively short scenes that do not build up to a discernible climax. The one scene that stands out involves the couple watching a soccer match together where Swen unexpectedly wins a bet against Gerald, eventually leading to a vicious, bitter confrontation. Various characters are referred to but not fully integrated into the play and the hostility between Swen and Gerald's mother is never fleshed out. The plot point about a piece of exercise equipment bought by Gerald which causes Swen to suffer a miscarriage seems overly macabre. The ending also seems fairly ambivalent and a tighter dramatic resolution would have been better.

Ng relies strongly on the device of the unseen character in For Better or For Worse and throughout the play, we only ever see Gerald and Swen, either interacting with each other or with other characters. It's a clean, pared-down approach that focuses our attention resolutely on these two characters but makes the play feel somewhat unfinished. There are times when I felt that I was essentially watching two monodramas running in parallel and I would have preferred to either see the smaller characters like the gossipy best friend, the Teochew-speaking mother or the daughter (all of whom could well have been played by the same actress) or to have more scenes with Gerald and Swen interacting with each other.

Jean Ng and Julius Foo do an admirable job in fleshing out these two ordinary-yet-extraordinary characters and doing so without any grand, dramatic gestures. Jean Ng in particular is superb as the lonely, faded housewife Swen. One of the most evocative scenes involves her simply lying curled up on the floor in anguish at having lost her child, the tender, wordless exchange between the two beautifully bringing out the pathos.

Claire Wong’s sensitive direction echoes the pared-down script by keeps the staging very simple and allowing the scenes to gently bleed into each other. Where Wong could perhaps have pushed further was in achieving a clear sense of space; the locations seem amorphous and one would have liked to see some of the furniture and props: not everything needs to be mimed and to rely so heavily on the audience's imagination.

Marriage is a bit of a gamble and sometimes the best way to deal with strife is to remember what brought you together in the first place. On this bittersweet note, the play ends with a voiceover from Gerald and Swen's first date, never quite letting us know if they will be okay but at the same time, comforting us in the knowledge that for all the hardships they have faced, there were plenty of good times to look back on.

It's always heartening to see instances of new Singaporean writing and this confident, heartfelt and absorbing play is a terrific addition to our local theatre canon. One can only hope that Ng continues  to write; I see in her a gifted chronicler of Singaporean society and someone with that rare ability to conjure up characters and scenes that speak to people from all walks of life.