This all-female murder mystery by Sing'theatre makes for a satisfying night out. Robert, the wealthy patriarch of a Singaporean-French family has been discovered in bed with a knife in his back. The heavy snow has cut off the house from the rest of the world and it appears that the person who killed Robert is one of the women of the household: his wife, sister, sister-in-law, mother-in-law, two daughters and two servants. Over the next two hours, secrets, lies and hidden agendas spill out as each of these women is revealed to have more to her than meets the eye. 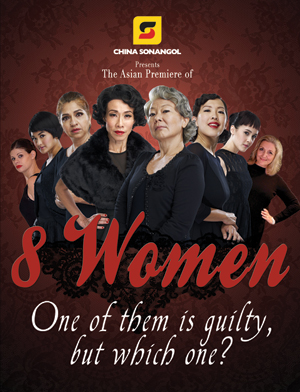 8 Women, written by French playwright Robert Thomas, is best known by its star-studded 2002 musical film version by François Ozon. Director Samantha Scott-Blackhall gives this oestrogen-fuelled whodunit a distinct Singaporean stamp with her solid, multi-racial cast. Daisy Irani, as the elderly Indian housekeeper, delivers her one-liners with superb comic timing. Serene Chen shines in one of her funniest roles yet as the wife's dorky, hypochondriac sister with her fits and tantrums. And while they take some time to settle down in their roles, Sophie Wee and Julie Abueva as the two daughters do an impressive job, Abueva in particular pulling off an impressive monologue towards the end.

However, the evening is let down by some creaky technical and directorial choices by Scott-Blackhall. First, there is the set. To be fair, Wong Chee Wai does a fantastic job with the design - all dark wallpaper, moody lamps and quaint wooden furniture - effectively conjuring up a faded country mansion during Christmas (bonus points for the falling snow and frosted windows). Yet, the furniture has a bizarre tendency to move around. An entire portion on the stage left remains unconnected to the rest of the set at the beginning of the play (revealing spotlights, empty space and a couple of stage hands) and, rather inexplicably, joins up with the rest of the furniture halfway through.

During a conversation between two actors, a side table jauntily edges forward between them. When a character rings the doorbell, that part of the set swings round 360 degrees just to give us a glimpse of her from the other side before the door is opened. I'm not sure what the intention was behind these interludes and if it had somehow meant to create a more cinematic effect. It ends up looking sloppy and even vaguely comical.

This is echoed by the sound and lighting design. Live sound artist Bani Haykal does evocative work but his mandate for this play appears to have been to underline practically every dramatic scene or line of dialogue with a sound effect. It feels incredibly stagey and rapidly starts to grate - I was reminded of  a similar approach taken by Chris Lee in Tartuffe by World-in-Theatre last year.

Likewise, James Tan's lighting cues involve little more than a broad brush dimming and brightening of the lights during the dramatic scenes in case it isn't obvious to the audience that something significant is happening. These gimmicky technical flourishes make the performance feel a little like a school play. One would like to think that Scott-Blackhall, whose sensitive direction of plays such as The Physicists and Freud's Last Session has won plaudits, knows a thing or two about subtlety.

Ultimately, 8 Women is buoyed by its competent acting and intriguing, suspenseful plot. I can promise that you will not see the end of this mystery coming. Scott-Blackhall has put together an altogether entertaining production that confidently treads the line between comedy and thriller. It's just a pity that she relies too much on the sound, lights and set to tell the story.