Going on the Way to Get Lost


The journey towards self-discovery is never an easy one. For 30-year-old urban drifter Michiru, life doesn't make a whole lot of sense and her past, present and future collide in a series of bizarre encounters.

This Fringe Fest offering by Japanese theatre group GOTANNDADAN is a surreal, quirky and wistful ride through the emptiness of modern Tokyo. Playwright and director Shiro Maeda's text is by turns philosophical and frivolous and we are inexorably caught up in Michiru's journey as it unfolds. A lengthy conversation with her sister turns out to have been an imaginary one, a past boyfriend crawls out from her mother's belly and a current boyfriend morphs into her unborn child. 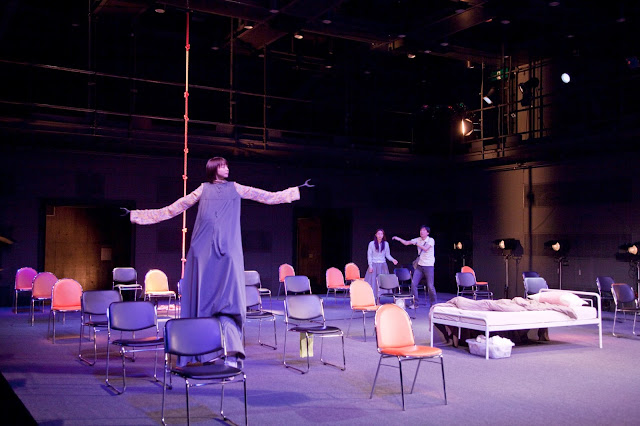 In the post-show discussion, Maeda alludes to themes of urban alienation, the sacredness of life and notions of masculinity and femininity that pervade the play. The Tokyo Tower, a masculine symbol towering over the city, stands in contrast to the female protagonist, whose journey at one point involves, quite literally, crawling inside herself and looking at life from the other side. Yet, some of these ideas are not thought through and the writing occasionally hovers in a hazy void without managing to pin down a concrete idea. A notable scene involves Michiru's two boyfriends revealing an OFF sign written across their nipples; they can apparently be "switched off" if this is pressed. If this gag was somehow meant to suggest that each life is precious and can easily be extinguished, it must have escaped me.

Saho Ito turns in a competent performance as Michiru and the young ensemble cast carry their scenes with energy and vigour. While Maeda's direction is a little messy (I didn't quite see the need for rows and rows of chairs) and the meandering narrative almost certainly should have been tightened, the play drives home the point that sometimes it's not the destination that counts but the journey. Perhaps we all need to be lost before being found.