It's been 15 years since the premiere of Ong Keng Sen's acclaimed intercultural theatre project, Lear. Inspired by Shakespeare's famous tragedy, Ong's production reinterpreted this tale of an aged king and his daughters through a distinctively eastern lens, embracing a myriad of Asian art forms in a fluent interplay of old and new performance styles. The performance played out like a profound meditation on the state of our common humanity, revelling in its very diversity. This distilled version of the original production is a purer, leaner and far more aesthetically intoxicating creature than its predecessor. Yet, as it moves further and further away from the original source material, one wonders what, if anything, it really adds this time round.

Central to Lear Dreaming are the evocative soundscapes that frame the action on stage. On the one hand, we have Rahayu Supanggah's rustic and folksy gamelan compositions. On the other, there is Toru Yamanaka's fast-paced, pulsating techno music. Quite literally, one hears the clash of old and new, of tradition and modernity.

The performers also contribute to the production's exquisite aural and visual texture. Chinese musician Wu Man as the evil daughter is decked out like an eighteenth century French aristocrat, and dazzles with her pipa playing. (Indeed, so rich is her music that it even gets its own surtitles!) Equally stunning is Korean court singer Kang Kwon Soon as the ghost of the queen mother, drifting along the stage in a mellifluous melancholy. Naohiko Umewaka, reprising the role he played in the original production, brings a grandeur to Lear, delivering his actions in the characteristic sparse, stylized manner of Noh theatre. Rounding off the quartet is Indonesian vocalist Piterman as the old man's loyal attendant who displays a rich and fluid physicality in his movements. 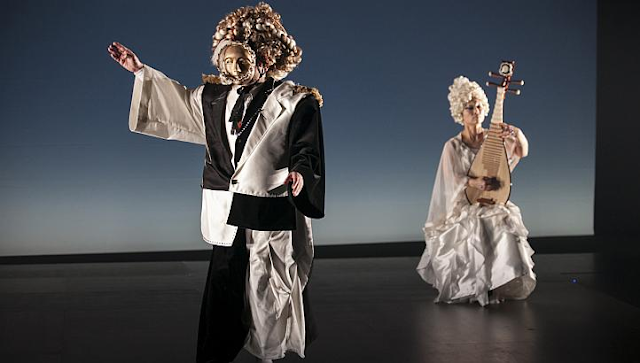 Each of the four performers is outstanding at his or her craft but if there was an element of the aesthetic that I couldn't fully appreciate, it was the blatant artificiality of the whole enterprise. The actors communicate with each other in their native tongues and there is a dizzying transition from one art form to another. As the performance goes on, one finds it hard to shake off the feeling that the whole thing is as elaborately and effortfully constructed as a Kabuki costume. So much for suspending one's disbelief.

Scott Zielinski's lighting design is both simple and breathtaking. For the most part, he lights the stage in large blocks of light with vividly coloured backdrops. Yet Zielinski also conjures up some impressive work with lasers. In a climactic scene, we see Umewaka's Lear enmeshed in a web of green laser beams that appear like the sea, threatening to swallow him into its murky depths. It's a powerful way of suggesting the endless boundaries one has to deal with in this earthly journey, of finding one's own space and learning to weather life's vicissitudes.

There's no denying that Lear Dreaming is a stunning production – a veritable treasure trove of artistic skill across the region and virtuosic individual performances. However, I'm not sure if the sum of all the parts adds up to an outstanding whole. In the end, I felt that it was less the story of one old man as he explored his memories than a collection of disparate art forms packaged together as a story in the loosest sense of the word. The character of Lear the wronged king and father ultimately fades into the background and the evil daughter emerges as a far more dominant figure. I also struggled to make sense of how the loyal attendant added anything to the narrative.

So does this bare, reworked version of the original Lear offer anything new? What message is one meant to take away? What does the enigmatic ending mean? Perhaps too much rationalising is counterproductive. After all, as Ong reminds us, "the human heart is more difficult to fathom than the bottom of the sea".