This is the third staging of Haresh Sharma's godeatgod in a decade, this time with a student cast as part of the NUS Arts Festival. Originally crafted as a response to 9/11 and tackling the disillusionment of mankind in a post-traumatic world, godeatgod is characteristic of TNS' experimental works: a veritable cornucopia of visuals, styles, stories and themes. In short, it's by no means an easy play to follow. 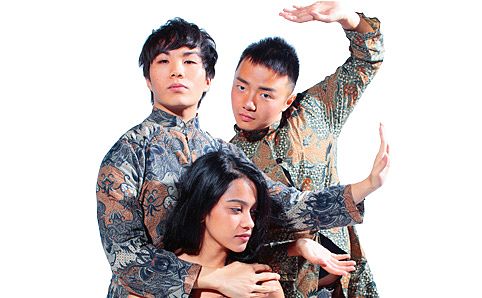 A connecting thread in the play is that of God being put on trial and held up to blame for the problems faced by mankind. There is also a parallel story of a young bride coping with the death of her husband after an accident, infused with a cloying sentimentality. In between these macro and micro perspectives of tragedy and a torrent of ethnic images, I found myself distinctly unmoved. The only successful device was in having the multinational cast share world events or episodes that had impacted on their personal lives. In particular, I could empathise with the PRC student who expressed a grim disbelief at his countrymen with reference to the harrowing incident where a two-year old girl, Yue Yue, was hit by a van and left on the road while people walked by in blithe disregard.

One of the weakest points in the play was a forum session where the actors discuss religious conversion, terrorism and finally argue at length about PRC scholar Sun Xu and his controversial remarks about Singaporeans that were featured on the media recently. One feels alienated from the babel of voices and is left wondering what the point is of dwelling on this seemingly inconsequential scandal.

Ultimately, I couldn't help reflecting that godeatgod would have worked so much better as part of the Fringe Festival, especially this year's edition with its theme of Art and Faith. Putting this up before a largely student crowd with amateur actors wasn't wise.