Hantaran Buat Mangsa Lupa (Offerings for the Victims of Amnesia) is a triple-bill of plays, written and directed by Irfan Kasban and presented by Teater Ekamatra, which tackles the issue of faith by drawing its inspiration from various aspects of Islam. It's a confrontational, intense and occasionally cryptic work but one that is suffused with a quiet beauty. The three plays in Hantaran are very different in tone but, seen as a whole, they form a stately journey through one's faith, from the courtly world of angels to the ordinary man in the street.

The trilogy begins with the gorgeously stylized Genap 40 (8/10), a play first staged back in 2007. We are presented with the image of a woman in a white veil praying against a red backdrop. A black thrust stage leads up to a square pond of water. The silence is punctuated by the trickle of water from a shard of ice in the ceiling melting into the pond. It’s a great visual tableau that sets the introspective, spiritual mood.

Drawing its inspiration from the story of Hawa (Eve), Genap 40 dramatises a meeting between her and the Malaikat (angel) summoned to blow the soul into her unborn child and bestow the decrees of fate, sustenance, finiteness and faith that will be etched into its being on the 40th day of conception. The dramatic impetus of the piece comes from Malaikat showing up for his task earlier than expected. 14-year-old Rian Asrudi captures the calm, ethereal quality of the piece, uttering his lines placidly and going about his motions with a graceful air. Rian however tends to speak too softly at times and lacks the gravitas of Malay TV stalwart Mastura Ahmad who captivates with her strong, emotive performance as Hawa.

Genap 40 plays out as a slow, elegant ritual and it is this sense of stasis that gives the play its resonance. I found myself noticing small details: after lighting every ten candles or so, Malaikat collects a new gift from his tray, delivers it to Hawa and moves to a different side of the stage; each gift is accepted by her with great respect as she goes about meticulously preparing 40 cups of tea. All the while, Irfan's dialogue, a lyrical shower of words, drizzles over the stage. As the line of lit candles along the thrust stage snakes its way to Hawa, we get the sense that the light and blessings of God are coming her way and she feels assured of that final decree. It is only then that Malaikat reveals his true identity: he is Azrael, the Angel of Death.

When Hawa declares that the name she had intended to give the child is Iman (faith), the subtle irony of the wordplay is not lost on us. Malaikat denies Hawa that final decree of iman, and from bearing her unborn child Iman, but deep down inside, her faith in God – her personal iman - remains unshaken. One cannot help but empathise with the angry and questioning voice of Hawa in the play, a feeling that many of us have felt at some stage of our lives when dealing with religion. It is here that the universality of Genap 40 shines through; it is not so much a specific document on Islam as a broader statement on one's personal beliefs and coming to terms with the divine will. 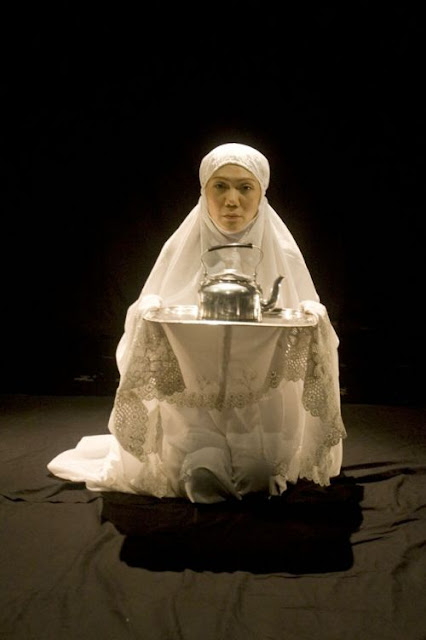 The second play - W.C. (7/10) – is entirely different. A boy (Rian Asrudi) and a man (Sani Hussin) are trapped in a toilet cubicle, apparently waiting for something to happen. The characters are named Ibrahim and Ismail, and the play is inspired by the story of sacrifice in the Qur’an where God sought to test the prophet Ibrahim (Abraham) by bidding him to sacrifice his son, Ismail (Ishmael).

The relationship between the characters in W.C is however far more ambiguous. At one point, Ibrahim approaches Ismail and utters, "Do you like to play football?" an innocuous statement that takes on a darker hue in the seedy context. A theme that comes across is that of voyeurism. The transparent walls of the toilet cubicle, which is built over the pond, allow us to see everything that goes on inside and we feel that we are intruding on a very personal space. We also have a sense of power over the characters by knowing what lurks beyond their confines. Sani and Rian do a good job of communicating the tension and shifting dynamic between the characters; the fitful and impulsive Ibrahim is lulled to sleep by Ismail, yet later he plays the role of comforter to the boy after a violent tussle.

A feature of W.C. that may not have been apparent is the numerous symbolic references to the Hajj pilgrimage. The characters are dressed in the basic white clothing of ihram worn by pilgrims during Hajj to signify their state of purity. A woman paces around the stage, raps on the door of the cubicle and runs back and forth. The programme notes tell us that she is Hajar - the mother of Ismail. I was reminded of the brisk walk performed by Hajj pilgrims between the hills of Safa and Marwah in Saudi Arabia, in commemoration of Hajar who went in search of water in the desert to feed her infant son. Indeed, reference is even made to the water that seems to be all around them. Towards the end of the play, Hajar takes wadded-up balls of tissue and throws them against the door of the cubicle, an allusion to the ritual stoning of the devil that is also performed as part of the Hajj. But who the devil meant to be? 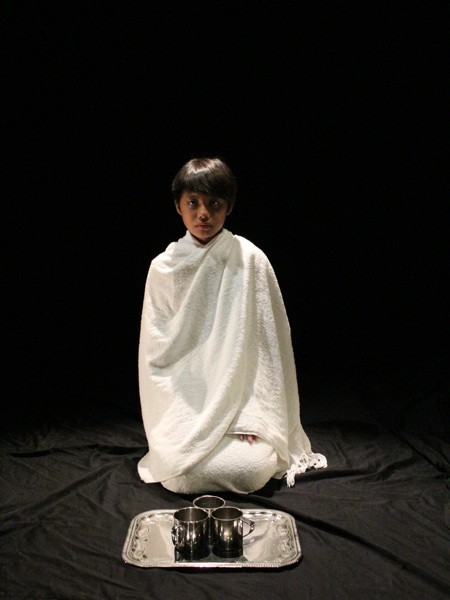 Hantaran is brought to a close with 94:05 (8/10), a new play that rounds up the trilogy by bringing it to the present day. 94:05 derives its name from chapter (surah) 94, verse 5 of the Qur'an which reads: “So, verily, with every difficulty, there is relief”. It is a simple, naturalistic monologue by a 39-year-old man called Ahmad (Sani Hussin) who suffers from a heart complication and recalls stories from both his life and that of the Prophet Muhammad.

I was particularly taken by the staging of this final play. For the second half of the performance (W.C. and 94:05), the seating is changed to that of a theatre-in-the-round, with audience members seated on all four sides of a central acting space. Irfan makes full use of this space, having Sani run round all four sides of the stage, constantly moving and addressing lines directly at the audience. What makes theatre-in-the-round so unique is the feeling of joint participation it elicits. When Sani asks us if we love our fathers, we find ourselves nodding even as we see the person sitting opposite us doing the same. We see them laugh, express pity (and sing Happy Birthday) at the same time and feel like we're undergoing a special experience together. It’s a brilliant way to draw in the audience and create truly effective theatre.

94:05 is a chatty and enjoyable piece. Aurally and linguistically, it stands in stark contrast to the smooth lyricism of Genap 40, featuring colloquial expressions, disjointed speech patterns and choppy cadences. This is the story of the everyman, one whose life has not been smooth but who nonetheless finds solace in his faith. The references to Prophet Muhammad’s life keep the narrative interesting while providing a religious gloss; in a clever parallel, Ahmad tells us how his chest was split open during an operation in the same way that the Prophet’s was by God. Yet, 94:05 is also a somewhat clunky piece that needs to be reined in. In terms of pace, it peters out towards the end when Ahmad starts reciting key events in his life and seems to be in a rush to wrap up his tale. While Sani turns in a heartfelt and engaging performance, I wished for a tighter narrative that reached its bittersweet dénouement more quickly.

The framing device for the play, the titular surah on relief (Al-Sharh), is recited verse by verse in Arabic. A unique feature of Al-Sharh is that verses 5 and 6 are repeated, emphasising the fact that solace would arrive for one in a period of darkness and difficulty. However, when the verses are spliced across the narrative, they tend to lose their impact. I would have preferred the surah to be recited in its entirety, perhaps at the start of the play to set the tone.

Each play in Hantaran stands on its own but put together for the first time, they form a rich triptych about the importance of believing in something greater than oneself. There are plenty of symbols and images in Irfan’s text that may not be caught by everyone but I don't think this proves alienating to an audience; it speaks to each person in a different way. Indeed, as Ahmad hands out little packets of sweets to every member of the audience before making his exit, one senses that one has received offerings from this fine young playwright that are not just physical.