PANGDEMONIUM, the maverick theatre company started up by Adrian and Tracie Pang last year, has dealt another winning hand. After Patrick Marber's blistering drama Closer which examined the emptiness of modern sexual relationships, the company's third production taps into the talents of this fine playwright once again in Dealer's Choice, Marber's award-winning debut play about the complex relationship between men and gambling. 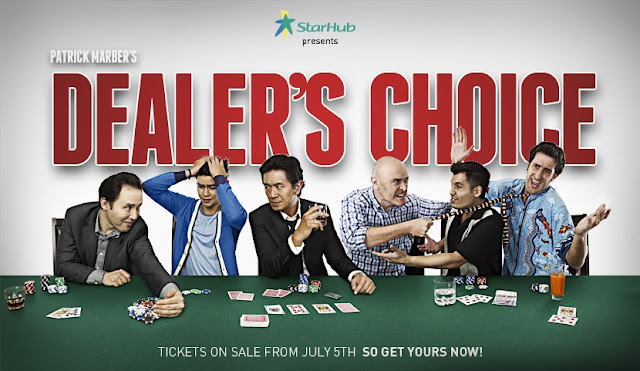 Dealer's Choice is set in a restaurant in London's East End and crackles with raw, masculine energy. There is an easy chemistry between Daniel Jenkins' affable chef Sweeney and Andy Tear's bumbling waiter 'Mugsy', their clipped East End accents lending a refreshing authenticity to Marber's dialogue. The gangly Tear in particular turns in an excellent comic performance as Mugsy with his naive aspirations of opening up a restaurant in a vacant toilet in Mile End, subjecting himself to endless teasing by the others. Daniel York also lends a brooding, enigmatic air to Ash, a hard-core gambler who joins in the men's weekly poker game, his secret agenda setting off a frisson of unease.

Despite Tracie Pang's generally slick direction, there are some uneven performances amongst the cast. Keagan Kang's Frankie, a Casanova-like waiter who is all set to move to Vegas to make it big as a professional gambler, tries a little too hard with his overcompensating hand gestures and larger-than-life antics. Julian Low's Carl, the gambling-addicted son of restaurant owner Stephen (Adrian Pang), also does not measure up to the other more seasoned actors and suffers from a patchy accent which occasionally lacks intonation. Low strikes one as being overly exuberant and energetic, as if he is trying too hard to make his presence felt.

Adrian Pang is entirely at home as the boss Stephen, a role he invests with a measured air, neither overdoing the accent nor drawing too much attention to the character. I was glad for the note of realism in the casting: Low looks like he could well be Pang's son and there is even a passing reference to Stephen's wife choosing to sit on her "fat Buddhist arse" while he went on with life, suggesting a Chinese immigrant family coping with their own domestic problems while trying to do the best for themselves in the gritty East End.

Marber uses poker as a metaphor for men's desperate desire to connect with others, yet it is ironic that even this connection is itself a transaction. In a tender scene, Stephen gives the broke Carl the hundred pound buy-in for the evening's game, literally paying for his estranged son's company at the game. Similarly, Mugsy is desperate to play even though he always inevitably loses and has to take on extra shifts to pay for his debts. We sense that ultimately, playing poker is how these men reach out to each other to overcome their own loneliness.

Eucien's Chia's excellent set for the first two acts is a cross-section of the kitchen and dining room, the poker theme picked up in the large playing cards on the floor demarcating the two areas. The climactic third act which takes place around the poker table in the basement is also brilliantly conjured up, with a turning table suggesting the constantly changing face of Lady Luck. Indeed, as we move below the restaurant, we also journey deeper behind the raw, base motivations of the players.

There is an aching sadness in Marber's writing about how these men survive in the absence of women - the divorced father, the serial womaniser, the lonely bachelor - and how the game of poker is part of the armour they use to shield themselves from the harsher realities of life. At the poker table, each man is on his own and his vulnerabilities are all laid bare. When he realizes that he has gambled away all the money he had set aside to take his daughter out the next day, Jenkins's Sweeney weeps on the stairs, the spectre of an utterly broken man. Likewise, Frankie's macho facade collapses like a house of cards when Ash notes that whenever Frankie bluffs, he has a scared look on his face.

Most poignantly, we realize that the biggest gambler of the lot is not Ash or Carl but the level-headed Stephen. In an impulsive moment, he bets the four thousand pounds owed by his son to Ash over the mere toss of a coin. For all his compassion and equanimity, it is Stephen who emerges the most tragic figure, sitting alone at his computer when everyone else has left, presumably to document the evening's game in detail. Poker for him in not so much an addiction or a power trip; it is a ritual he is unable to shake off.

Dealer's Choice is a bold, confident choice for PANGDEMONIUM and one which is extremely topical in a country increasingly seduced by casino culture. It seems that they have discovered their own niche in Singapore theatre - the dark comedy - one which packs in the laughs but also delivers deeper lessons about life's realities. In that vein, I would love to see PANGDEMONIUM take on the gritty street plays of David Mamet or bittersweet domestic comedies of Alan Ayckbourn in future productions. In the meantime, I shall be putting my dancing shoes aside for their rendition of edgy rock musical Spring Awakening next February.