Teater Ekamatra's output this year has been impressive, ranging from a restaging of the racially-explosive Charged to slick thriller The Gunpowder Trail. If there's one company slated to take Malay theatre in Singapore to the next level, it would most certainly be my choice. And therefore I really wanted to like Mata Hati, Ekamatra's 2011 year-end production. It was controversial, broad in its thematic range and seemed to hit the right notes. However, all this did not quite add up to a satisfying finish.

Robin Loon's play about a high-flying Malay minister and his (homo)sexual shenanigans is certainly intriguing. It adopts a fairly basic premise: a retired minister is interviewed by a postgraduate student and the secrets from his past are slowly unravelled, trapping him in a pit of emotional torment. I've had a limited exposure to Loon's plays over the years but recall his writing style as one that was fresh, revelatory and naturalistic. However, there is an awkwardness to the dialogue in Mata Hati that wears the play down. Smooth Anglophilic cadences and Singaporean characters who speak in overly articulate tones may look good on paper but somehow don’t strike a credible note when performed. 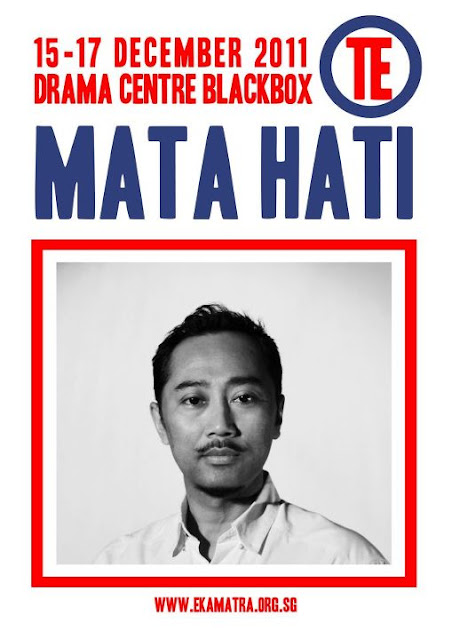 At the heart of Mata Hati is Amir Mahmood, the classic Malay success story. Scholarships, prestige and impressive portfolios all come his way and he rapidly rises to the highest echelons of the civil service. Yet, Amir's biggest secret is his homosexuality, a fact that is finally revealed when his sordid exploits with rent boys on a state trip to Paris are leaked to the authorities. Throughout the play, Amir is confronted by the ghosts of his past: his free-spirited childhood friend who urges him to stand up for who he is, his estranged daughter who reveals her disappointment in him for living a life of deceit and his former civil servant subordinates who remind him of his immense potential and how much he has going for him.

The problem I found, despite the rich themes and clever wordplay, was what the play was driving at. It delves into issues of Malay culture, political expediency and homosexual relations but does not seem to make a clear statement about anything. There are scenes about the delicate way the government handles a potential scandal and a successful Malay leader feeling disconnected from fellow members of his community. However, none of these issues are teased out. The final image we are left with is simply of a man who has been undone by his actions and is resigned to the fact that life ploughs on. Much like Ekamatra's last production, The Gunpowder Trail, I welcomed the image of an emancipated Malay professional but was disappointed by the lack of any hard-hitting social commentary to provide some depth.

Mata Hati does however benefit from decent acting across the board. Isabella Chiam gives a heartfelt performance as the mild-mannered postgraduate student from mainland China, Eleanor Tan is all silky efficiency as a senior government aide sent by the PM to sort out Amir's situation and there is a superb turn by Tan Shou Chen as an effete civil servant in Amir's office judiciously keeping his sexual "proclivities" under wraps. Johari Aziz is competent as Amir, bringing a hint of ironic detachment and flippancy to the character that is tempered with an increasing sense of regret and emotional isolation. However, his performance is compromised by the play's artificial dialogue and tendency to delve into melodrama.


Irfan Kasban's dusky lighting design conjures up a moody room of reckoning and maintains the suspense in each scene. Director Zizi Azah also does a commendable job, manipulating the action over the limited theatre space. I enjoyed her stylized, almost ritualistic, opening and closing sequences and the deliberate use of chalk and water to draw on the floor and then wash it away: a quasi-religious allusion to something dirty being cleansed. What was somehow less well communicated was the choice of set: a cross-shaped platform with a throne-like chair in the middle. There is a lot of pacing back and forth during the play which does not seem to be wholly warranted and the central "throne" remains under-utilised; if there was a deeper significance to this, it somehow escaped me.

Where Mata Hati achieves its resonance is its ability to highlight the different layers of discrimination that operate in society and by contrasting Amir's decided lack of self-awareness compared to everyone else. The immigrant student interviewer is acutely aware of her place as an outsider and makes a conscious effort to blend in, even changing the way she speaks her native Chinese. The junior civil servant is candid about not being able to rise up the civil service hierarchy as he is gay and not a scholar. Even the senior government aide flatly remarks that she would never be in the same scrape as Amir as she is of the "wrong race and wrong gender". We are reminded that despite the so-called meritocracy of our society, everyone is still a victim of labels that are difficult to shake off.

Mata Hati is a play that has been billed as the downfall of a "tragic hero" but one cannot quite draw the same parallel from the story of a gay Malay minister who leads a successful life and only seems to regret his actions much later. Does this play invoke pity or horror on the level of Hamlet or Oedipus Rex? I don't think so. At a more basic level, one finds it hard to connect with Amir - is this man really a victim? Perhaps not the best choice of play for Ekamatra then, but kudos to them for constantly pushing the boundaries of Malay theatre and delivering a flawed but nuanced examination of the uneasy relationship between sex and politics.