John Cariani's Almost, Maine premiered in Portland five years ago, enjoyed an off-Broadway run and has since become a staple of theatre groups around the country. The premise is simple: it's a bitterly cold winter in Maine and the residents of the fictitious town of Almost are restless. On the night that the rare northern lights make an appearance, bringing a luminescence to the otherwise cheerless sky, we journey through the lives and loves of these quirky individuals.

This is a fun, crowd-pleasing debut production for The Mechanicals, a company consisting of young theatre professionals who first staged the play in Manila earlier this year. The nine two-person plays, which range from wistful romance to whimsical comedy, take us through the pleasures, pains and pitfalls of love, painting a colourful tapestry of the human heart and all its foibles. 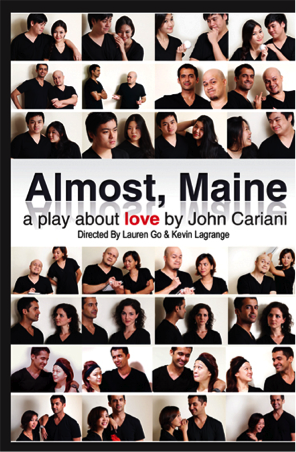 Directors Lauren Go and Kevin Lagrange have made a great choice by staging Almost, Maine at Se7en 1nch, a trendy bar at Clarke Quay. The play literally makes use of the entire acting space of the bar: the aisles, doors, bar counter and even the pool table are all effectively integrated into the scenes, giving them a rich fluidity. By playing right at the audience, the production gains a strong sense of intimacy and we are drawn towards these characters, joining in their laughter, pain and anguish. Perhaps the concept could have been been taken one step further by having the actors actually talking to or directing lines at members of the audience, increasing the feeling of joint participation and solidarity.

Several of the cast members double up as more than one character and do an excellent job in their scenes. Pavan Singh turns in a fresh, naturalistic performance in Sad & Glad about a guy who encounters an old flame at a bar and realizes that she has moved on with life. Lauren Go (equally adept at acting as in directing) is memorably touching in Getting It Back as a girl returning "all the love" her boyfriend had given her. And Kluane Saunders is an absolute comic gem in Seeing the Thing as a rambling, tomboyish girl too blind to open up her heart to the guy standing right in front of her.

There is a strong contingent from LASALLE and it is great to see them developing their talents in an independent production with their peers. That being said, there are some weak performances amongst the ensemble and the cast as a whole is less adept at conveying the delicate emotions required in the more poignant scenes. Comedy is definitely a strong suit and memorable scenes include two guys literally falling all over each other and a couple peeling off layers and layers (and layers!) of winter clothing before making a beeline for the bedroom.
The production boasts some decent directing and enjoyable acting but there are some technical issues that should have been ironed out. Blocking was not dealt with adequately. Due to the configuration of the space, members of the audience found themselves unable to see the faces of the actors for certain scenes. My theatre companion actually had to stand and move to a better viewing point for an entire scene and when you have people shifting around and craning their necks, it's never a good thing. The manually-operated spotlighting was also rather sloppy in its execution and seemed to be unnecessarily bright at times.


There is a clever conceit in Cariani's play about the town of Almost having an amorphous identity (one character remarks how it is "Almost" but not quite an independent geographical entity) and this being reflected in the dislocated nature of its residents. The backdrop of the northern lights also drives this point home; like energetic sub-atomic particles that give rise to this glorious burst of colour in the sky, these people inhabit a strange orbit of their own, colliding frequently but only occasionally making that vital human connection. It's a neat idea, but only two scenes explicitly drew our attention to the world outside, and it would have been nice for the natural landscape to be better integrated into the scenes.

Almost, Maine is an assured debut by The Mechanicals and though there is some way to go in terms of refining its acting and production talents and building up a coherent identity as a company, it is refreshing to see them break out using such an innovative venue. I certainly believe that this has tremendous potential in Singapore: why not stage plays in cafes or bars, allowing viewers to have a drink and unwind without the formal setting of a theatre or performance space? Musicians and comedians have been doing it for ages and perhaps it's high time our theatre groups caught on.