The much-vaunted year-long residency of the Donmar Warehouse at the Wyndham's Theatre kicks off this autumn with Chekhov's early play Ivanov. Despite all its five-star reviews, I didn't find myself entirely convinced by Kenneth Branagh's portrayal of a man grappling with his conscience who finally feels compelled to take his own life. Perhaps Tom Stoppard did lose something in translation with his occasionally flippant (though by no means unamusing) turn of phrase and this is one of those plays where literary purists - and especially Chekhov buffs - would have a lot to chew over. 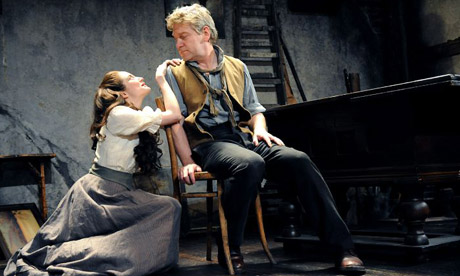 Nonetheless, Michael Grandage's production is of extremely high quality. There are beautiful costumes and sets and I loved the visual palette of greys and browns to evoke a sombre yet intimate bucolic setting. Acting is fantastic acting across the board and the play also makes great use of olfactory stimuli such as cigarette smoke and gunpowder to add to the sense of foreboding and impending tragedy.

Just as in Trevor Nunn's The Seagull, humour works to great effect here and Michael Billington of the Guardian probably hit the nail on the head by noting how the production seamlessly blends comedy into the tragedy so that we laughed even amidst the most poignant of scenes.