David Hare's new play is a shrewd, self-declared piece of "pure fiction" on the pitfalls of the New Labour administration. Comprising short, snappy scenes that occasionally end with a wistful monologue, Gethsemane moves at a brisk pace and proves extremely entertaining.


Yet Hare's satire seems rather toothless, not least because his characters are caricatured and many of the impassioned speeches of the character at the moral centre of the play - an idealistic school teacher, Lori - serve no other purpose than for the playwright to voice his skepticism about the nature of modern British politics.


Gethsemane boasts solid performances and Tamsin Greig is outstanding as the resourceful and zealous Home Secretary with equally good work by Anthony Calf as the suave, saxophone-playing Prime Minister. 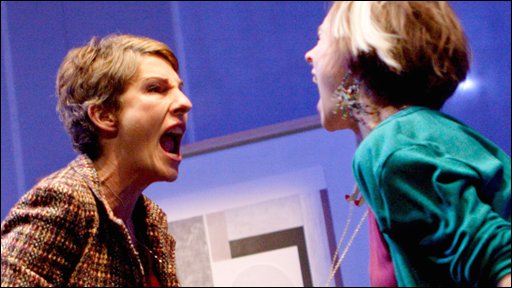 Political plays can be tricky to stage because they risk being overly preachy on the one hand or chock-full of innuendo and baffling allusions on the other. While I expected Hare to turn in something more earnest given his success in writing about issues such as the privatization debate or the Iraq War, this latest effort feels dated and rather stagey. Audio-visuals are brilliantly modern and there is strong direction but overall, it proves slightly disappointing in terms of theme.


As a piece of political commentary Gethsemane falters but as a pure piece of entertainment, this is a stylish, sexy and entertaining examination of the marriage of politics and business in the world of New Labour and makes for a great night out at the theatre.