The Old Vic has presented a truly stunning season this year and its latest production, a snazzy 20th anniversary revival of David Mamet’s 1988 play Speed-the-Plow, adds yet another feather to its very dignified cap. Artistic Director and veteran actor Kevin Spacey is joined by the charismatic Jeff Goldblum for an unforgettable night of brash, brusque banter, the way Mamet does it best.

David Mamet ranks amongst the very small handful of playwrights who has not only successfully made the transition from writing stage plays to screenplays but has also enjoyed considerable success as a director in Hollywood over the past two decades. In many ways then, Speed-the-Plow is his tribute to this incredible world of movie-making that we all love to hate and the eternal conflict of art versus money. It is perhaps apposite that Spacey and Goldblum, both seasoned actors on the silver screen, catapult us into this glamorous world of Hollywood bigwigs about two movie producers debating over the next big summer blockbuster and a chance to make a cartload of money. 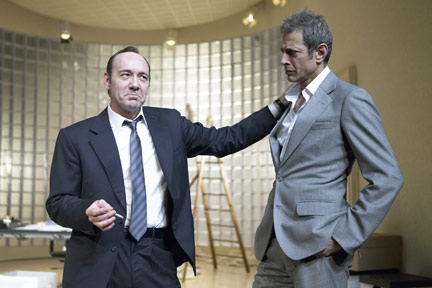 Kevin Spacey, last seen on the London stage in A Moon for the Misbegotten at the Old Vic, is in top form as junior producer Charlie Fox. His enthusiasm at having closed a deal with a famous actor and luring him away from a rival studio realises itself in childish and almost effeminate bursts of delight. Indeed, his energy seems so utterly boundless that it’s difficult to take one’s eyes off him for even a second. Spacey's deft transition from deferential eager-beaver to vindictive money-worshipper is sustained superbly and never leaves us in any doubt of the essential humanness of his character.

Jeff Goldblum strikes an imposing figure as newly-promoted senior producer Bobby Gould. Sauntering about in a tight white shirt and equally fitting suit, he oozes charm as he chews idly on his cigar and looks so tall that he appears to be drifting around in stilts. The banter between the men is first-rate and Mamet’s trademark rapid-fire dialogue and staccato retorts are delivered with an intensity that makes it quite impossible to pause for breath. Into this male world steps an idealistic temporary secretary, Karen (Laura Michelle Kelly). Kelly is perhaps the Achilles’ heel of the play. It seems rather unfortunate that she opts to play Karen as a bright-eyed ingénue from beginning to end rather than combining it with the trite but oh-so-effective hint of the smouldering temptress (this, in a role created by Madonna in the original Broadway production, seems rather sacrilegious!) as she is quizzed relentlessly by the men and later tries to persuade Gould to make an existentialist picture rather than another mindless blockbuster. Kelly’s English accent also seems incongruous and it’s rather disappointing that she did not make more of an effort to sound American. She would have thrived if she had caricatured Karen but her earnest naïveté and plodding goodwill make the character’s contributions rather superfluous.

Matthew Warchus, hot off the heels from his acclaimed stage adaptation of The Lord of the Rings, does a commendable job with the directing, making Mamet’s dialogue glide effortlessly from delightfully comic to razor-sharp. He is clever in his use of space and has the men alternately poised in extreme corners and standing centrestage, blending quiet intensity with vibrant showmanship. However, the pace dips considerably in the languid second scene between Goldblum and Kelly, a fact not enhanced by the persistence of several lengthy monologues that could have done with tighter editing. The effects also seem rather contrived at times – a glass is hurled with great force to the sound of a very feeble crash offstage and the fight between the men seems slightly overdone. Rather than running continuously, having an interval would have been an effective device to galvanise the audience (there is a nice bar after all) for the thrilling dénouement of the play. Nonetheless, Rob Howell’s excellent set – all bright lights and high ceilings – complement the action well and lend an aura of power to the energetic exchanges. 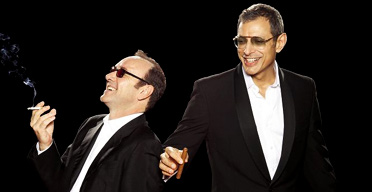 Speed-the-Plow is very clearly Spacey’s show and arguably one of his best stage performances to date. He carries the play magnificently from start to end and his chemistry with Goldblum is utterly compelling. Like so many other plays in Mamet’s impressive canon, Speed-the-Plow offers us an insight into the shallowness of yet another aspect of the American consumerist culture – the movie-making world. As Charlie Fox memorably declares, "Life in the movie business is like the beginning of a new romance – it’s full of surprises and you’re constantly getting fucked." Indeed, one cannot agree more.