by Marc Camoletti
in a new version by W!LD RICE
Victoria Theatre, Singapore

Much of the humour in this adaptation derives from the spot-on accents of the three actresses. Each of them have their own hilarious mannerisms, ranging from Oei's perpetual string of Cantonese expletives to Yong's geisha-like bashfulness and bowing. Yong's opening sequence, delivering a flight safety announcement in flawless Japanese, was particularly memorable and earned her a very well-deserved round of applause. 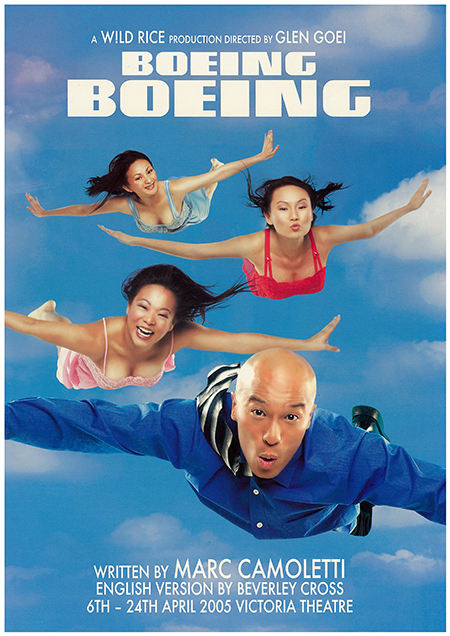 Glen Goei's directing is perfectly orchestrated. As is the case with all farces, timing is absolutely essential and the cast managed to deliver all their lines spot-on, keeping the energy levels sky-high throughout the play.

The two supporting cast members also pack in a punch. Brendon Fernandez, last seen in Toy Factory's Bent, puts in an extremely good performance as Bernard's strait-laced friend, Robert, who gets rather unwillingly swept into the domestic fracas. Chari Arespacochaga, as rotund Filipino maid Rosa, delivers the few lines she has with absolute panache. Her dead-pan retort "I'm not a woman. I'm a domestic servant!" leaves the audience in stitches.

Ivan Heng proves himself equally adept at set design as at acting and directing; the Zen decor of the set is tempered with a lovely symmetry in the way the living room leads off to six doors, three on each wall. As there are six characters as well, these function very well for the curtain call.

On the whole, this is a great production of Boeing Boeing - a brilliantly funny and entertaining take on Camoletti's timeless farce and proof once again that a localised version of a classic play can be an absolute hoot. An evening well-spent indeed.
Labels: comedy french theatre play wild rice