by Anton Chekhov
based on a English version by Sarah Ruhl
Nine Years Theatre and SITI Company
Singapore International Festival of Arts 2021
Drama Centre Theatre, Singapore
As far as a version of Chekhov goes, this is truly quite unique. Singapore-based Nine Years Theatre continues its excavation into world classics in collaboration with New York-based SITI Company in this SIFA commission that was originally meant to be staged last year but had to be postponed due to the pandemic. The play is performed in a mix of Mandarin and English with the Singaporean actors appearing onstage alongside American actors who are beamed in virtually through screen projections.
Three Sisters chronicles the lives of the Prozorov sisters and their family and friends over the course of several years in a provincial Russian town. Eldest sister Olga (Ellen Lauren) is a responsible schoolteacher and spinster. Middle sister Masha (Akiko Aizawa) is trapped in a dull marriage and begins an affair with idealistic army officer Vershinin (Hang Qian Chou). Irina (Mia Chee), the idealistic youngest, longs to return to their hometown Moscow. She agrees to marry the Baron Tuzenbach whom she admires but does not love but he is unfortunately shot and killed in a pointless duel. Andrei (Timothy Wan), their older brother, marries upwardly mobile Natasha who worms her way into their life, becoming a domineering presence. 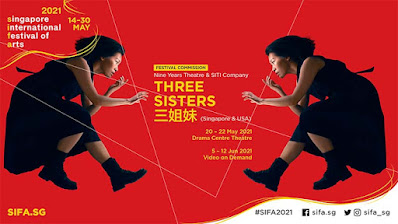 Co-directed by Nelson Chia of Nine Years Theatre and Darron L West of the SITI Company, the production is based on Sarah Ruhl's English translation of the text and benefits from crisp, clean scene transitions. The hybrid presentation format underscores the theme of distance between the characters: while they may be next to one another, they are yet so far apart emotionally.
Yet, I wished the twin formats had been better integrated. Projections on the stark white walls of the set featuring migrating birds, marching soldiers or verdant greenery allow us to bridge the space between the screen and stage actors and could have been employed more often. I found myself longing for more immersive group scenes such as those at the end of the first two acts where a lunch or drinks party plays out simultaneously onstage and on-screen, allowing the characters to interact with one another in a more organic way instead of through the rectangular confines of a box.
Mia Chee is arresting as the wide-eyed Irina, who runs around in a white dress and turns in a rich and wonderfully expressive performance. There is also strong work by Ellen Lauren as the responsible, world-weary Olga and Wendi Wee Hian as Andrei's wife Natasha who starts off unsure of herself but grows steadily over the course of the play to the point where she effectively runs the household. Unfortunately, some of the other characters are not as convincing. Neo Hai Bin’s plays army officer Solyony as a rather annoying party guest and Stephen Duff Webber's Tuzenbach is extremely wooden, making his romance with Irina barely plausible. Akiko Aizawa’s Masha is perhaps the most disappointing of the lot; her character is meant to radiate ennui and dry humour but she merely looks grumpy and lacks chemistry with the others.
The production claim to be reimagined as a memory scape of Irina. It's an intriguing idea but one that is not really conveyed by the fairly traditional staging. While we get hints of this with Irina as a ghost-like presence watching the other characters at the start and end of each scene, I would have liked to see this pushed further. Elsewhere, anachronistic touches are questionable: why do we have iPads, Skype and modern cameras while Irina works in a telegraph office and everyone dresses in period costumes? The military presence and idea of feeling lonely and sequestered in a small town would have made less sense in a modern setting.
On a more technical front, one struggles to understand why the video projections only allow three characters to appear at a time on the screen. This results in some characters appearing to drop in and out of scenes even if they are meant to be there all along. It is rather frustrating for the audience and prevents one from being able to fully engage with each scene and seeing the characters respond to events as they unfold.
There is no doubt that one is unlikely to forget this boundary-pushing take on Three Sisters. It bears the hallmarks of a classic Nine Years Theatre production and yet, the sheer hybridity uncovers a hitherto undiscovered richness in the text. What would it have been like if we could see all the actors share the same stage together? To what extent have the limitations of the pandemic constrained the production's full potential? One can't help but wonder.
I discuss this production in more detail in the Arts Equator theatre podcast, together with playwright, poet and editor Nabilah Said and theatre educator Matthew Lyon.
The Crystalwords score: 3.5/5
Labels: chekhov chinese language drama nine years theatre play russian theatre singapore festival of arts singaporean theatre