One square metre. That's the amount of space allocated to each vendor at the Sungei Road flea market, Singapore's oldest and longest-running flea market until its closure by the authorities in July 2017.

This piece of verbatim theatre by playwright 三木 (Sanmu), presented as part of the Singapore Theatre Festival, follows in the vein of W!LD RICE's hugely successful plays Cooling Off Day and Cook a Pot of Curry by presenting a multitude of real people, real voices and real stories of individuals to expound on a particular theme or topic. 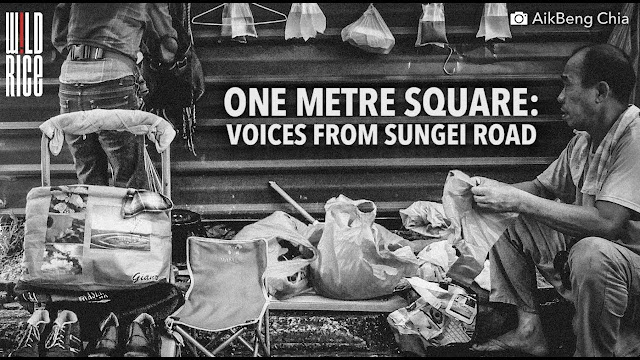 Five actors (Ong Kian Sin, Tan Beng Tian, Michael Tan, Tay Kong Hui and Yong Ser Pin) take on a gamut of roles ranging from actual vendors at the Sungei Road 'thieves market' to politicians, tourists, activists and academics. We get a inside look at the buzz of activity in the market itself prior to its closure and the fate of the vendors after the authorities barricaded the area and conversations that sprung up in its wake.

There's an awful lot crammed in but one feels that the verbatim theatre formula is a little tired this time round. Stretching at over a hundred minutes without an intermission, the play outstays its welcome and ends up feeling repetitive. Over and over again, we are presented with the same message of vendors hankering for the colourful days of the past, lamenting the demise of yet another cultural institution in the face of modernity and progress. Rather than being punchy, it ends up being laboured.

One finds oneself drawn by the voices of the actual vendors themselves, interesting, colourful personalities with nicknames like "The Poet", "The Gangster", "The Top Student" and "Liang Po-Po". There are riveting performances by Tay Kong Hui as an affable local leader and Ong Kian Sin as a shrewd, dynamic businessman. Yet, these tales are diluted by tepid speeches by politicians calling for the market's closure and commentators with their own theories on what the closure signifies. Do we really need to keep hearing extracts from Dr Amy Khor's Parliamentary speeches defending the government's decision or the words of navel-gazing academics? It's no substitute for the actual people on the ground who disappear quietly into the void.

Indeed, the stories of these individuals provide tremendous food for thought and are presented with humanity and heart. Hard-hitting scenes are punctuated with moments of hilarity. Tan Beng Tian's "Liang Po-Po" character, for instance, proudly declares that she carries more brands than Mustafa. Tay likewise gives us an engaging account of his attempt to write letters to the authorities only to have the police come knocking on his door.

It's noteworthy that over 80% of the vendors at Sungei Road were senior citizens who were forced to eke out a living by peddling second-hand goods, people who simply did not have the resources to set up a proper shop or find another means of living. The closure of the market signalled not just the end of an era but the livelihood of this small underclass. Why should one group of people be prioritised over another? Is this what meritocracy in Singapore means?

There's no denying that one of the highlights of Sungei Road is its exceptionally talented cast. Yet the strength of these actors lie in playing certain types of role: the older Mandarin or dialect-speaking Singaporean. Attempts to play characters from a different demographic come across as artificial and do not quite have the impact they intend. I couldn't help but recall the range exhibited by the cast in other verbatim plays like Cooling Off Day, allowing us to empathise with the hugely diverse set of characters featured. Here, one struggles to suspend one's disbelief at times because the disconnect between the actors and the individuals they seek to portray is so strong.


Zelda Tatiana Ng's direction also leaves much to be desired. The action is poorly paced, resulting in significant drag in the second half. When the vendors pack up their wares and briefly leave the stage, one is almost convinced that the play is over. Other staging decisions also miss the mark. The actors have a habit of reading speeches off placards which they then dramatically flick to the ground. One is not sure as to the point of this needlessly theatrical move. Elsewhere, we have two actors playing the same character which ends up feeling slightly confusing.

One Metre Square is a rich and affecting work that chronicles the erasure of a vital slice of our cultural fabric. These are stories which desperately need to be heard and discussed by Singaporeans from all walks of life. One just wishes that tighter editing and direction had been employed so that the message could be delivered with more bite.