Leda and the Rage

As its title suggests, there is a lot of anger in this play. Written, directed and co-performed by acclaimed theatre maker Edith Podesta and staged as the closing show of the Esplanade's Studios season, Leda and the Rage examines female perspectives on rape and sexual trauma, showing how very little has changed from antiquity to the modern day. 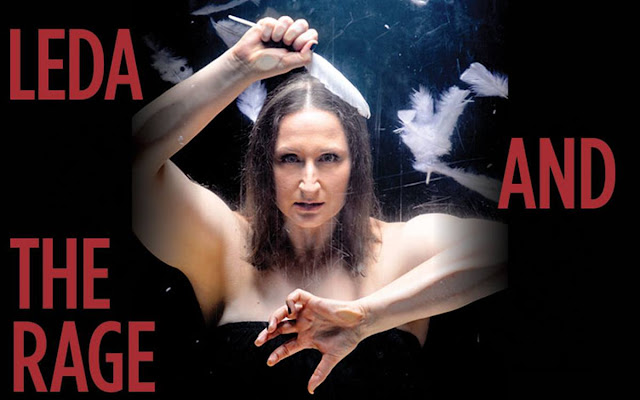 Things kick off on an academic note as Podesta, in the persona of an art historian, delivers a lecture about depictions of rape in classical paintings and how the narrative of sexual assault has been fashioned by men. There's no better example than the eponymous Leda of Greek mythology; seduced by the god Zeus in the guise of a swan, her rape has been effectively eroticized in paintings and poetry.

The art lecture is interspersed by a legal account of rape over time and how the balance of power between the genders has never been equal. We learn how, historically, rape was a property crime against a women's father because her loss of virginity made her 'damaged goods'. Modern laws are far from ideal: under the Singapore Penal Code, men remain exempt from committing an act of rape against their wives.

After this rather formal commentary, the story fashions itself into a more personal space. It's revealed that Podesta's character is a survivor of rape who is undergoing therapy due to sleep difficulties. She finds it hard to see men as anything but predators, resulting in her punching a boyfriend who simply tries to touch her and admitting to her male therapist that sometimes, all she does when she sees him is to think about the gap between the letters "e" and "r". It's just one of many subtle turns of phrase that quietly burn a hole in our hearts.

In a flashback, Podesta's character conveys the harrowing experience of a woman trying to report a sexual assault to the French police, dealing with an indifferent, oily-faced interpreter who keeps twisting her words, second-guessing her at every opportunity. Rape myths like how a woman who wears short skirts is simply 'asking for it' are only endemic of a system that had entrenched gender oppression and violence, making women always feel unsafe. It's no wonder that so many women suffer from a trauma that tears them apart. Like Podesta's character, they simply have no outlet for all the frustration and rage they feel and resort to therapy, self-medication and self-harm.

Podesta is a gifted performer who has us rapt in every scene. It's clear that she cares deeply about the issues explored and her conviction shines through in scenes that have her awash in emotion. She is supported by veteran actor Jeremiah Choy in a long-anticipated comeback role as the therapist and range of other supporting characters. He provides a calm, measured edge to the action, subverting, perhaps, the myth that all men are indeed the threatening presence they are made out to be.

Water is a powerful motif in the production and Wong Chee Wai's stark, monochromatic set is crowned by a shimmering pool. This is initially positioned as a menacing space where Podesta's character converses with women from past and present who have been through the trauma of rape. Yet, the pool ultimately becomes a site of renewal, a giant shower where Podesta methodically cleanses herself, returning agency to her body. It's a small beacon of hope in an otherwise dense, talky production but enough for us to feel that there is light at the end of the tunnel. All a survivor of sexual assault can do, ultimately, is to survive and go on with her life.


Podesta works with an incredible technical team that makes the experience a truly multi-sensory one. Teo Wee Boon's disconcerting music, Adrian Tan's lighting and Brian Gothong Tan's multimedia projections of snakes and barren landscapes powerfully conjure up the mental state of a person undergoing trauma. Blocked out of sensations, voices drowned out, theirs is an existence that is at times no better than a living hell. Statistics about rape are conveyed through crisp graphics. We are told, for instance, that only 11% of reported rape cases end up with a conviction, tiny red icons on the screen glinting with the weight of sexual injustice.

Podesta's decision to engage shadow interpreters (Amirah Osman and Jun An from The Singapore Association for the Deaf) is another highlight of this production. They not only translate the spoken text into sign language but follow the actors around, conveying the weight of the words through the poetry of their hands. The result is beautiful and kudos to the production team and the Esplanade for opening up this urgent and powerful play to an entirely new category of audience members.

As dramaturg Rosemary McGowan mentions in the programme notes, Leda and the Rage is just the start of a conversation. We've seen issues of sexual assault played out on a large scale in the entertainment industry and the rallying cry of the #metoo movement. Now, more than ever, is the time to turn that rage into action.