Over the past three decades, Haresh Sharma has produced a plethora of dramas and hard-hitting social commentaries but here is the playwright at his darkest and bleakest. Hope, written while Sharma was completing his graduate studies in Birmingham, UK, was staged by The Necessary Stage in 1994 and has not been seen since. This revival for the Esplanade Studios' Sharma-centric season sees the play being translated into Malay by Zulfadli Rashid and is a co-production with Teater Ekamatra.

Hope revolves around two pairs of characters in dire straits. Journalist friends Hadi (Hirzi Zulkiflie) and Azman (Fir Rahman) find their lives torn apart following a car crash which renders Azman wheelchair-bound and vegetative. One is consumed by guilt for his part in the accident while the other battles desperation in his withered  state. 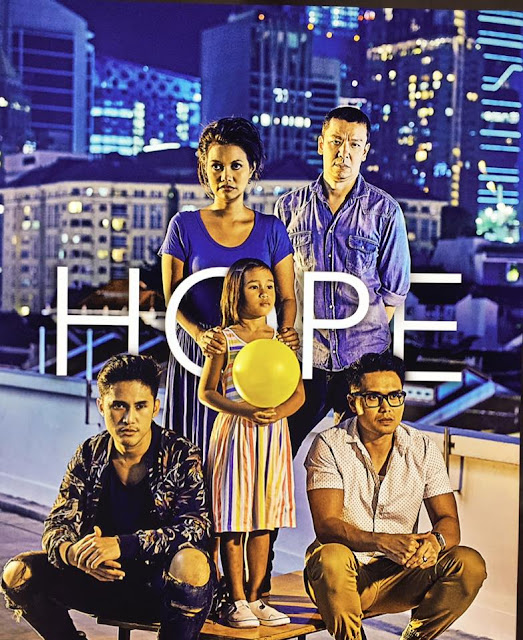 As if to reiterate the theme of death and desperation that hangs over these characters like a shroud, the narrative is underscored by the image of bodies being found floating in the Singapore River. And unlike Sharma's other plays which at least offer a sense of closure or the possibility of a new beginning, Hope remains largely grim, cheerless and cold.

All this risks collapsing into bleak melodrama but in the assured hands of director Mohd Fared Zainal, the nuances of the text are teased out to perfection. Fared is sensitive to the rhythm of the piece and extracts masterful performances from his cast. While the play is suffused with an acute melancholy, he reminds us that it is a melancholy that still contains fragile shards of hope.

In one of the most moving scenes, Hairul returns home with a slice of cake and a present for his daughter's sixth birthday only to be accosted by a loanshark in his void deck who takes sadistic pleasure in trampling on the gift and smearing his clothes with cake. Sani conveys this casual brutality through gestures alone and when he finally sees his daughter crying herself to sleep, his are the bitter, anguished tears of a man who knows he has failed in every sense of the word.

There are equally strong performances by the other actors. Hirzi's Hadi lacerates the soul as he comes to the conclusion that the only way to help his friend out of his predicament is to release him from the constraints of the world. Siti's restrained yet powerful turn as Izzati is just as moving and we cannot help but feel for her as a woman who just longs for Hairul to be a regular husband and father who takes care of his family instead of the other way round.


Sharma creates links between the separate storylines by infusing his naturalistic scenes with elements of magic realism, a recurrent device in his later plays. We see Azman rising from his wheelchair and berating his maddeningly solicitous friend who insists on reading aloud for hours or enveloping him in blankets. In his dreams, he encounters the bereft Izzati and gradually learns to accept his situation. This is nicely paralleled by the real-life meeting between Hairul and Hadi at the river's edge, resulting in both men drinking themselves into a frenzy and committing senseless violence on a stray cat.

Just like god fashioned man according to religious scripture, Azman seeks to build a new, perfect world fashioned out of clay and a significant image is that of Azman, in his dream-space, filling the stage with effigies of people and buildings. This small, ideal world stands in contrast to the ragged world which the characters inhabit.

The narrative is lifted by exquisite audio-visual work by sound designer Bani Haykal and video designer Eric Lee that convey a simmering unease. Music, in particular, is outstandingly employed in the opening and closing sequences. The set cleverly pits the cityscape as a jagged, unfamiliar terrain, one which the characters have to pick their way through precariously.

One cannot deny that text lacks the sophistication and polish of Sharma's later work; the characters could be fleshed out more and parts of the storyline feel heavy-handed. However, it's worth noting that this was one of the few instances where the playwright did not get the chance to work collaboratively with the creative team to refine the play, something that has become a hallmark of TNS productions.

Ultimately, Hope remains an oddly lyrical, elegiac and moving piece of theatre and this production reminds us, powerfully, that there can be magnificence even in the mundane.