What if a single moment in our lives can play out in an endless number of ways? Nick Payne's sharp and tender two-hander, which has enjoyed celebrated runs on both the West End and Broadway, embraces the concept of string theory and the multiverse and applies this to an everyday romantic relationship.

Laid-back beekeeper Roland (Edward Harrison) and ebullient scientist Marianne (Stephanie Street) meet at a party. An awkward joke and a reference to a significant other quickly kills the conversation. The scene starts again. This time they exchange a laugh, warm up to each other and sparks begin to fly. Do they hit it off or don't they? 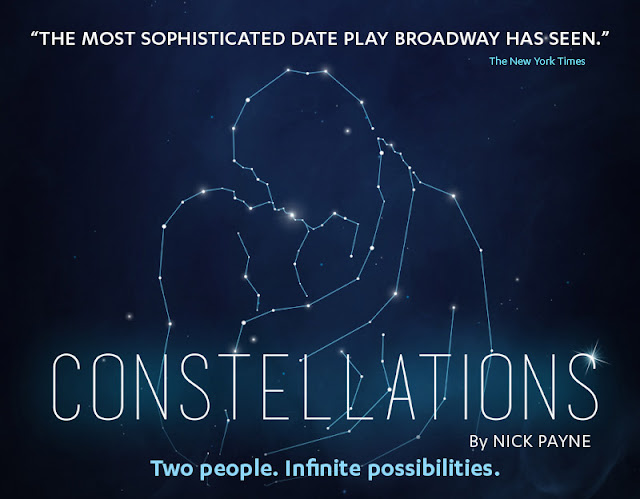 Like particles suspended in space and time, the two characters in Constellations move towards an ever-changing destiny. Scenes from all stages of their relationship are played and replayed with only slight changes in body language, tone and inflection. Each time it leads to a slightly different outcome. There may or may not be an affair with a third party, a medical scare may or may not prove life-threatening and even when they part ways, a chance to rekindle the romance may or may not present itself.

Played out on an almost bare stage with no props, the focus of the play is squarely on the acting and one is drawn to the utterly natural exchanges between Harrison's affable Roland and Street's articulate Marianne, who ironically laments, at one point, that she just wishes she had a choice in life. Harrison and Street have an easy chemistry that carries their scenes with ease and one gets the sense of having invaded a private conversation between two people caught up in their own corner of the universe.

Bruce Guthrie, who directed Othello and Twelfth Night for the SRT's Shakespeare in the Park, delivers a crisp and compelling production which keeps us invested in the characters. Sharp scene transitions prevent the iterative format from wearing down the narrative. Interestingly, the only scenes that feel laboured are a series of emotional conversations with the characters standing on opposite sides of a darkened stage. If this is meant to illustrate a sense of consistency amidst the chaos of human relationships, it feels a little too contrived.


Constellations also benefits from a strong creative team. Ctrl Fre@k's evocative soundscapes, Alison Neighbour's stark, surreal set and Gabriel Chan's striking lighting design, consisting of a constellation of bulbs suspended on a tangle of wires, conjure up the delightfully random trajectories that these two characters take in their journey through life.

It's difficult to see a play like this going on for any longer than its eighty minutes but the material does not outstay its welcome and Payne's nuanced script has just enough to keep us intrigued. Love is indeed the perfect canvas to illustrate the infinite possibilities of the universe and the power of the play is such that one cannot help but wonder how differently things may have tuned out in one's own life had a different choice been made at some point in the past.