Four hundred years ago, bands of travelling players brought Shakespeare’s great plays to people far and wide. Now, Dominic Dromgoole, artistic director of Shakespeare’s Globe, has revived this fine tradition on an unprecedented scale with a tour of Hamlet to all 205 countries in the world. Singapore is the 130th city they have visited since they started this epic journey in April last year.

This version of Hamlet is both compact and charming. An ensemble cast of eight actors perform all roles, periodically rotating their parts to keep things fresh. They also delight us with musical interludes and provide simple yet stirring soundscapes to augment the action. 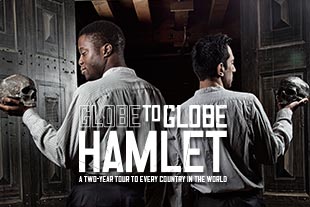 Naeem Hayat and Ladi Emeruwa alternate the title role. The latter (who performed on the night I attended) gives a solid, articulate turn as the prince of Denmark. His Hamlet wears “the trappings and the suits of woe” with a belligerent tetchiness. Indeed, there is a genuine ferocity in Emeruwa’s Hamlet that never leaves one in doubt of his intention to avenge his father’s death at the hands of his uncle, the usurping King Claudius. Madness for him is nothing more than a subterfuge, a grand tool to dissemble and distract. However, Emeruwa lacks the rich and complex spectrum of emotions that plague Hamlet: no intense melancholy, no philosophical peregrinations and self-doubt. When he savagely confronts his mother, Gertrude, we only witness his anger instead of conflicting shades of sadness, disappointment or envy.

There is strong work by Keith Bartlett as Claudius, who silkily switches from benevolent monarch to ruthless assassin and John Dougall, as court advisor Polonius, is a man of hilariously bumbling circumlocutions. I was less enamoured of Jennifer Leong’s Ophelia who is more whiny schoolgirl than tragic heroine and doesn’t quite evoke the pathos one would expect.

A particular highlight is the play-within-a-play that Hamlet famously uses to “catch the conscience of the King”. Using just a simple curtain, we are treated to both the band of players (who bring the house down with their delightful dumbshow) and Claudius and Gertrude as spectators. In a powerful meta-theatrical moment, Claudius strides through the audience, breaking up the enacted play as if he had been watching it along with us.

The set resembles a makeshift tent and is a nice nod to the itinerant nature of the production, itself performed by a constantly shifting company of actors. It is slightly unfortunate that this is all but swallowed up in the imposing opulence of the Capitol Theatre (a smaller and more intimate venue would have been ideal). The vastness of the space also results in some of the verse getting lost. Unsurprisingly, the broad comedy gets the strongest reactions from the crowd.

There's no way that a production designed to weather a journey across seven continents will ever manage to be definitive. Dromgoole’s Hamlet may not be especially nuanced but this is ultimately a competent and charming version that will rightly be welcomed all over the globe.