The troubled heart of South Africa is laid bare in this visceral and vivid contemporary adaptation of Strindberg's 1888 play Miss Julie written and directed by the internationally acclaimed Yael Farber (and presented in Singapore by the Singapore Repertory Theatre).

It's Freedom Day, marking twenty years since the end of apartheid. In a remote farmhouse in the Karoo, Julie (Hilda Cronje), the young white daughter of a landowner, paces restlessly in her kitchen whilst a young black servant, John (Bongile Mantsai), polishes her father's boots. Julie is drawn to the festivity outside amongst the black workers and urges John to celebrate with her at a barn dance. Over the course of one tumultuous evening, the jagged history between the two characters is unearthed and they are pulled towards each other, only to be irretrievably locked in a physical, social and emotional mire that has devastating consequences. 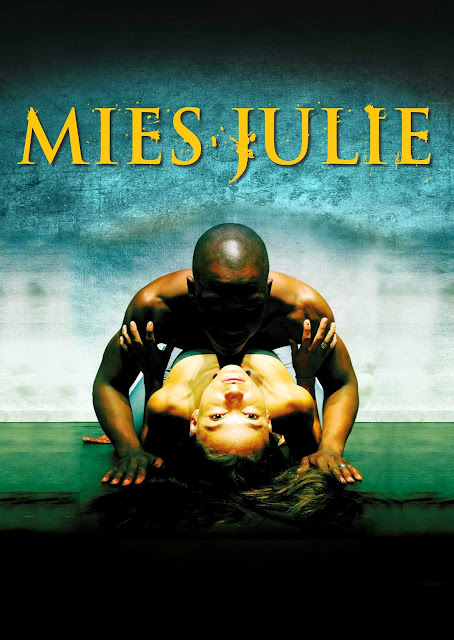 While Strindberg's play shocked its late nineteenth century audience by suggesting a relationship across socio-economic classes, Farber pushes a much tougher agenda by framing the debate in the context of race. Has society really changed in South Africa, even after the demise of its strict policy of racial segregation? How much are people defined by the political and social narratives of the past?

Farber's production revels in its sheer physicality. Julie sprawls on the kitchen table with her legs in the air like a wild cat. John moves with a silent, masculine intensity that is indicative of danger; one feels a sense of foreboding as he jumps off the table with a thunderous bang. No attempt is made to mask the sexual tension between the characters that gradually reaches boiling point. The moment of physical release, when it does arrive, is an explosion of emotions – alternately tender, violent and bitter.

Cronje is a mesmerizing presence as Julie. She starts off somewhat cold and arrogant as she broods in the kitchen, mocking John as he assiduously shines her father's boots. Slowly, we watch her physical and emotional defences being chipped away till she succumbs to her desires, exposing her sheer vulnerability. Cronje powerfully marries animal passion with bitter, self-righteous indignation, highlighting the complexities of trying to navigate a relationship in a world without the confines and structures of the past.

Mantsai takes a while to warm up to his role as the outsider who begins to realize that the world may well be within his grasp. Denied of being treated as an equal for years, he is unable to fathom the idea of a white girl toying with his emotions and when he finally has his way with her, it is with the air of a man finally staking his claim on a long-desired object and making his presence undeniably felt.

The character of Christine, a cook and John's fiancée in the original Strindberg play, is here reinvented as John's mother (Zoleka Helesi), a hardy woman who plods on with her dreary life of cleaning and scrubbing for white masters. In a heart-wrenching scene, she recounts how she had tried to vote, only to discover that she had no fingerprints; a lifetime of cleaning had, quite literally, eradicated her identity. It's a chilling reminder of the countless hordes of people whose lives quietly go by without ever questioning the status quo.

Even at ninety minutes and without an interval, there is some drag in the narrative and the play could benefit from some editing to do away with tedious exposition that plagues the latter half. The uninhibited, brutish intensity of the scenes can also make for uncomfortable viewing. Yet, it is a testament to Farber that the direction and pacing remains tight. Scenes segue neatly into each other and the addition of dreamlike sequences featuring an older black woman (Tandiwe "Nofirst" Lungisa) chillingly evokes the ancestral world that retains its anchor on the present.

Farber's production is bolstered by a compelling aural and visual landscape. The music, composed by brothers Daniel and Matthew Pencer and presented live on stage, contributes to an aching disquiet that leaves us on the edge of our seats till the shocking resolution. Patrick Curtis's stark, utilitarian set and dusky lighting also work well to create a sense of simmering unease that lingers throughout the play.

This sizzling, savage production breathes fresh life into a well-worn classic and forces us to examine its themes with a completely different lens. By rooting itself in history and politics, one is left acutely aware of the thorny issues that emerge when a country deals with the predicament of its past.