"People are not comfortable with difference", one of the characters in American playwright Neil LaBute's Fat Pig declares. While we have no shortage of plays that dissect issues of race, class and religion, LaBute turns his eye to society's emphasis on physical appearance, giving us a romantic comedy that is simultaneously social commentary.

This first production of PANGDEMONIUM's "Misfits" season is a play that is bookended by two exceptionally pivotal scenes: the one where it all begins and the one where it all ends. Tracie Pang, with her usual directorial flair, nails the former in which slick executive Tom (Gavin Yap) runs into sassy, voluble and rotund librarian Helen (Frances Lee) in a crowded cafe during lunch. It's hard to overstate how important this first encounter is: it features some of LaBute's sharpest writing and draws one right into the action. The scene unfolds through an exquisite tapestry of awkward pauses and animated banter: Helen making silly, self-deprecating jokes and Tom's politically correct genes pulling in nine different directions. Finally, she gives him her a phone number and a new relationship is born. When Helen reminds Tom before leaving that she really wished he would have the courage to call her, one feels a little tug on one's heartstrings. And as Tom smiles into his salad and tucks her number into his pocket, one can't help but smile too. Every part of this sweet and empathetic scene is directed to perfection and makes one root for the couple. 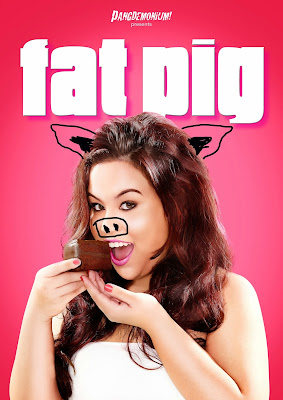 Yap brings a boyish charm to Tom, the successful yuppie who would never in his wildest dreams have considered being friends with (let alone dating) someone like Helen but yet finds himself irresistibly drawn to her joie de vivre. So much of this play is about the internal struggle of Tom and the ability of someone like Helen to breathe colour and perspective into his life and Yap conveys the giddy ecstasy of new love tinged with pressure over what his friends may think when they met Helen, pressure that eventually gets the better of him.

Final year acting student Lee, yet another of the enormously talented young thespians PANGDEMONIUM has featured, turns in a wonderfully observed performance as Helen, a woman who is perfectly comfortable in her own skin but still unable to mask the slight cracks that occasionally surface in her self-confidence. Her smile, at once, suggests confidence with shades of vulnerability and she comes across as an immensely real, likable character who simply enjoys being herself. Yap and Lee play off each other extremely well (there is a delicious scene in the bedroom) and the play is all the richer for it.

Rounding out the cast are Carter (Zachary Ibrahim) - Tom's obnoxious best friend and co-worker who gives him hell for "taking a dump on [his] one moment in the sun" by a person like Helen – and Jeannie (Elizabeth Lazan), a sexy accounts executive interested in Tom who views his choice of a partner in Helen as a huge personal insult. While LaBute succeeds in sketching a three-dimensional portrait of both Tom and Helen, these two supporting characters seem rather unsatisfying. It's hard not to find the former's cocky remarks and the latter's melodramatic recriminations somewhat grating as the play goes on.

Carter is the one character whom LaBute invests with his most lucid social observations, giving voice to all the prejudicial thoughts we may have on a daily basis but tend not to say. Though Zachary milks his scenes a little too much for my liking, the problems here are less to do with the acting and more with the character itself. It's hard to believe that Tom would be best friends with a brash womaniser like Carter and that he casually shrugs it off when Carter places Helen's picture on the office website, inviting ridicule over her size. Interestingly enough, Carter is given a searing speech where he reveals that his own mother was fat and that he had spitefully insulted her in the middle of a supermarket in his youth. Yet any chance in digging deeper into this moment of humanity is never followed through, leaving the character little more than a vapid accessory.

Set design has always been a central element of a PANGDEMONIUM production and after three superb shows designed by Philip Engleheart, Fat Pig sees the return of esteemed collaborator Eucien Chia. Chia puts together a beautiful, sleek set that slides, stacks and unfolds, taking us effortlessly from office to bedroom to beach. Thinking about the symbolic overtones that have featured in previous PANGDEMONIUM sets (Spring Awakening and Next to Normal come to mind), I found myself wondering if incorporating a food metaphor into the design may have been an interesting touch. Kudos as well to James Tan for good work on the lighting (and a very convincing artificial sun) and Guo Ning Ru for sensitive music.

Where I take issue with this production is in the final scene. As much as it's important to get things off to a good start, it's equally vital to bring them to a fitting conclusion. It's obvious that both Tom and Helen are crushed that things cannot go on but I didn't quite see the need for both of them to start sniffling; it's an unnecessary departure into the realm of the maudlin. As an audience member, I wanted to feel indignant and disappointed at Tom's capitulation to convention, not weepy over a failed romance. It's here that Pang could have recrafted the scene, perhaps leaving the characters sad but stoic instead of having them both break down. While it doesn't change the quiet, devastating jolt the play delivers, it would have made for a richer dramatic tableau.

On final note, this is yet another PANGDEMONIUM production (like Closer, Rabbit Hole and Gruesome Playground Injuries) with universal themes that could very easily have been transplanted into a local setting. Indeed, the general lack of cultural specificity in Fat Pig makes it even easier to set in Singapore, where it could have struck more of a chord with local audiences. I simply don't see the insistence on having (mostly) local actors doing foreign accents if there's no good reason to do so. It appears that PANGDEMONIUM's next production has been localised so hopefully this might be something they decide to explore further in the future.