A good play can be summed up in a sentence. In Shakespeare’s Othello, it boils down to a single word: jealousy. It's a bitter, burning “green-ey’d monster” of an emotion that tears the characters apart, leading to tragic consequences for all.  Bruce Guthrie’s modern take on the tale of Moorish general Othello (Daniel Francis), his new bride Desdemona (Wendy Kweh) and his villainous ensign Iago (Daniel Jenkins) is bold, sensuous and thrilling and this may well be the best instalment of SRT’s annual Shakespeare in the Park series yet. 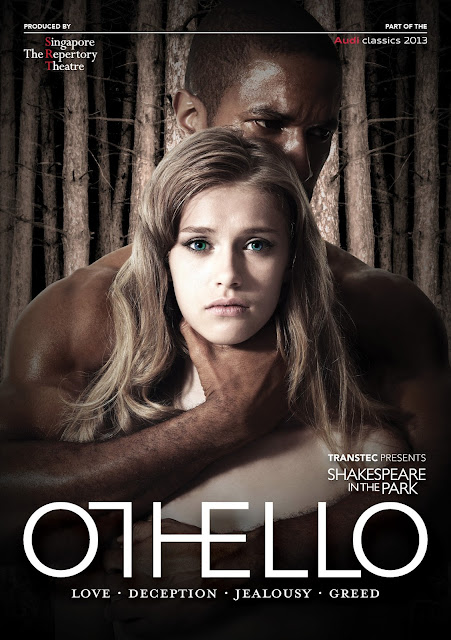 British import Daniel Francis invests Othello with a playful menace, his deep voice hinting even at the start that this is a man who could be capable of violence if pushed far enough. Francis handles the weight and musicality of the verse with finesse; his speech before the Duke of Venice is beautifully rich and cadenced. Where he falters is making the leap from loving husband to bitter, envious man capable of the worst. It’s not an easy transition to make and even though the pivotal handkerchief scene where Iago sows the seeds of jealousy in his mind is handled competently, Francis's change in emotion does not feel plausible. When he suddenly goes into a fit and hits Desdemona, it feels almost pantomime. One cannot help wondering: surely a man as composed and level-headed as this would have more self-control?

Daniel Jenkins has put in impressive performances in previous Shakespeare in the Park productions of Macbeth and Twelfth Night and here, he makes a compelling Iago, that most practiced of Shakespeare’s villains. His scenes with Francis are a pleasure to watch and the two men square off against each other very well. The large open-air setting however doesn't give the play its much needed sense of intimacy. We rarely feel locked into Iago’s confidence and even though what he does is dastardly to say the least, one does not feel the inchoate, smouldering resentment this man harbours, that “motive-hunting of motiveless malignity” Coleridge so famously speaks of.

One of the chief problems in previous editions of Shakespeare in the Park has been the uneven quality of the acting and I’m pleased to note that this year’s cast do a largely decent job. There is strong work by Stephen Whiley as Cassio and Gerald Chew as Brabantio. Even more impressive is Singapore theatre newcomer Zura Johnson whose Emilia who grows in strength and conviction as the play progresses; her outburst at the end when Iago’s duplicity is laid bare is superbly handled. The one loose cannon in the cast is Shane Mardjuki whose jittery, effeminate take on Roderigo is plain annoying and seems too desperate to elicit laughs when none are required.

Wendy Kweh, last seen as Lady Capulet in W!ld Rice’s Romeo and Juliet, is interesting as Desdemona. Contrary to the usual portrayal of the character as a guileless, demure girl, Kweh’s Desdemona is a woman of some chutzpah. This playful, feisty approach generally works: Desdemona, after all, is a girl who openly defies her father by marrying an older man of a different skin colour and plunges herself into the uncertainty of war. Yet, Kweh never quite strikes an emotional chord with the audience. We don't feel pity at her anguish at being thought unfaithful or horror at the senselessness of her death. Being playful and spunky is one thing, allowing the emotions to land is another. Desdemona's costumes also do not help. She enters in a garish red party frock that is utterly incongruous with everyone else on stage, spends the bulk of the play in a white tank top and shorts and then ends with a blue evening gown with feathers. The odd mix of girlish evening wear and tomboyish lounge clothes feels poorly thought out and does not help with the credibility of the character.

Set designer Robin Don goes for a modern military look that is all satellite dishes, camouflage-print containers and snaking ladders. It’s a trendy design that emphasizes the imminence of war and violence in a modern age. Guthrie has the ability to tell a story in all three dimensions; scenes are cleverly incorporated on raised platforms and there is a constant, buzzing sense of activity on stage. Much like Sam Mendes’s Richard III (where Guthrie served as Assistant Director) there is a strong cinematic quality to the production that allows the scenes to whiz by without losing momentum and retain their dramatic thrust. Kudos also to the impressive use of multimedia: the arrival of Othello in Cyprus on a digitized helicopter and news broadcasts of the Turkish fleet being destroyed are particularly well done.

Indeed, Othello has plenty to recommend itself and for newcomers to Shakespeare, soaking in the bright lights and fancy visuals under the stars make for an ideal introduction to the Bard. What I would caution the SRT against however is emphasising spectacle over substance. It’s fine to throw in a couple of bells and whistles but a production which holds itself out as the Shakespeare event of the year should ultimately focus on the primacy of the text. As the man himself said, “The play’s the thing”.