Like a good cup of espresso, David Mamet’s plays are sharp, strong and leave one with a fantastic aftertaste. Glengarry Glen Ross stands at the very heart of Mamet’s impressive oeuvre and has been acclaimed by critics worldwide, winning the 1984 Pulitzer Prize for Drama. James Macdonald directs a brilliant revival of this all-male play at the Apollo Theatre this autumn with a stellar cast.

What makes Mamet one of the foremost American playwrights of his generation is the brusqueness he injects into his work. Instead of embracing poetic language or uplifting, feel-good themes, he confronts the cold, hard reality of human failings that lurk behind the ostensibly glittering lives we lead. Mamet is essentially a moralist and his plays dissect individual identity and the emptiness that lies beneath the so-called American dream.

Glengarry Glen Ross explores the uber-competitive world of real estate salesmen in Chicago, desperate to close the next available deal and land themselves a prime spot on the company’s hall of fame. Pitted against each other in a cut-throat sales competition where the winner gets a Cadillac, the runner-up a pair of steak knives and the loser gets fired, the pressure to succeed is palpable. The sales competition amongst the men can be seen as a microcosm for modern society, engineered for the survival of the fittest. 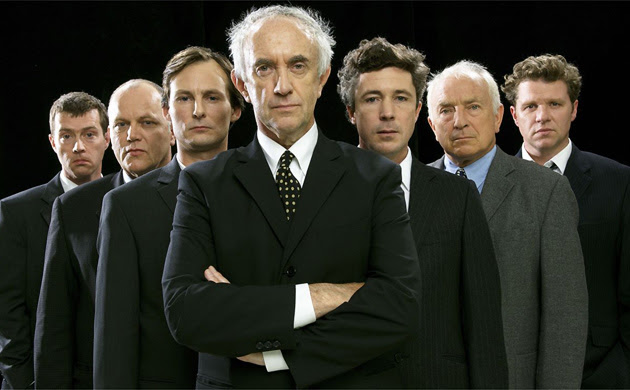 The first act introduces us to the various characters in three separate scenes set in a Chinese restaurant.  Veteran stage and film actor Jonathan Pryce plays Shelly Levene, the pathetic has-been salesman desperate to make a comeback and who is not beneath bribing the company secretary (Peter McDonald) to get the best possible leads to close a deal.  Like Miller’s tragic anti-hero Willy Loman in Death of a Salesman, Levene is aware that he has lost his touch but yet valiantly clings to his profession, declaring "A man’s his job". Pryce’s transformation in the character is admirable and in the touching dénouement, we see the utter collapse of a man who used to set himself up on a pedestal.

From desperation, we switch to resentment in the exchange between the motor-mouthed Moss (Matthew Marsh) and taciturn Aaronow (Paul Freeman) about the mercenary world they’re in and a plan is hatched to revolt against the company rather than succumb to its relentless demands.  Aiden Gillen pulls in a fantastic performance as smooth-talking ‘Top Gun’ salesman Richard Roma, engaging in an existential tirade about life to a fellow diner and then, ever the calculated sales machine, swooping in to sell him some property when he gets drawn into the conversation.

The second half, boasting a beautifully designed set by Anthony Ward, recreates a real-estate office so well that it seems almost surreal to see it on a stage.  A crime has been committed in the office and a sullen police inspector interrogates the salesmen one by one.  We seem to think we know who is guilty but the ending takes us all by surprise. 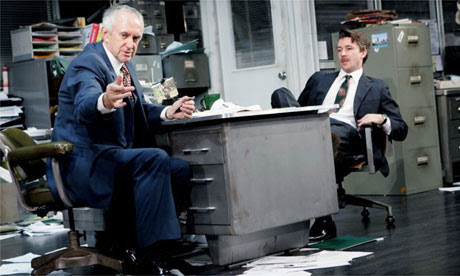 One of Mamet’s great strengths is his amazing ear for dialogue and it has been rightly remarked that "no one alive writes better American". The characters in Glengarry Glen Ross interrupt each other with staccato replies, have harsh cadences and coarse language. (The word "fuck" is so liberally splattered in the dialogue that it seems more a preposition than a profanity.) What Mamet achieves through this is recreating speech as it is actually spoken amongst the everyday working man without being sugar-coated for a theatre audience.  The result is a verbal onslaught so powerful and engaging that we feel exhausted at the end of a scene, being so caught up in the exchange.

Glengarry Glen Ross uses the metaphor of a salesman to represent life as a constant meaningless consumerist race, one which is bound to overcome us in the end. It may be a bleak indictment of the modern world but a telling one indeed. For even as we feel sorry for the characters we know that deep down inside, we really are sympathising with ourselves.