One could perhaps be forgiven for drawing a blank when quizzed about Lim Boon Keng, a Singaporean pioneer who has not have received much coverage from the history books. His great-granddaughter Stella Kon, best known for her luminous monodrama Emily of Emerald Hill, hopes to change things with this musical, a project that has been years in the making.

Directed by theatre veteran Jeremiah Choy, starring well-loved comedian Sebastian Tan in the lead role and supported by an established creative team, LBK, The Musical had all the ingredients to be a powerful production to celebrate the life of this Western-educated Peranakan doctor who worked tirelessly for change in his community. 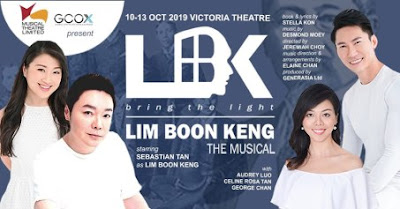 We are swept through more than half a century of Lim's career, starting from his election to the Straits Chinese Legislative Assembly in 1895 to his educational and social reforms, his time abroad as President of Xiamen University and denouncement as a traitor to his country at the military tribunal after the Second World War. Alongside this, we get a glimpse into his personal life: his friendship with fellow Peranakan community leader  Song Ong Siang (George Chan) and relationships with first wife Margaret (Audrey Luo) who died of consumption and second wife Grace (Celine Rosa Tan).

Unfortunately, for all the references to sambal belachan that pepper the text (there's an entire song about the beloved condiment), LBK, The Musical emerges as little more than a bland history report set to song. The 90-minute book contains swathes of exposition but lacks character development and an emotional hook to keep one invested in the story.

I discuss this production in this month's Arts Equator theatre podcast, together with playwright and editor Nabilah Said and theatre educator Matthew Lyon.