The Good, the Bad and the Sholay


It's been four years since Shiv Tandan's The Good, the Bad and the Sholay, first staged as an NUS student production back in 2011, delighted audiences. This superb revival by Checkpoint Theatre - which also marks the company's debut at The Esplanade's Kalaa Utsavam - could not have been more highly anticipated; it is completely sold out.

Scenes from Bollywood's iconic 1975 film Sholay, about best friends and petty criminals Jai and Veeru who arrive at a village and take down feared bandit Gabbar Singh, are spliced with the endearing, personal story of Raghav, a boy from from small town Ambala, Haryana who makes his way to Singapore to study engineering at NUS. 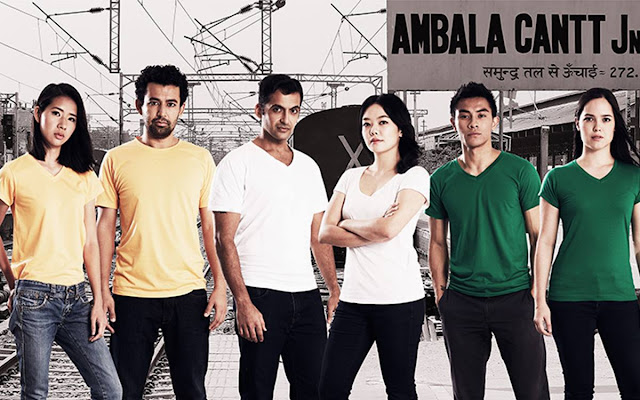 The production, co-directed by Huzir Sulaiman and Tandan, follows much in the vein of the 2011 original with a clean staging that sees an ensemble of eight actors on a single, curved platform. They inhabit a variety of roles with relish and display some truly impressive ensemble work, recreating overbearing family gatherings, a tonga clattering along the road and village kids racing their bikes down the streets screaming with glee. While not all the actors prove entirely equal to the colourful Indian characters and steady stream of Hindi dialogue that peppers the text, they give off a riveting, energetic performance (complete with sound effects) that is impossible to fault.

Thomas Pang, who made an astonishing debut in Tribes earlier this year, embodies the central role of Raghav and maniacal villain Gabbar with gusto and proves a thoroughly engaging presence on stage. There is also great work by Julie Wee as a motor-mouthed Basanti, Kubhaer T. Jethwani as the lovelorn Veeru and Ghafir Akbar as Raghav's gadget-obsessed younger brother. The actors perform multiple songs from Sholay a capella ("Holi Ke Din" is a runaway crowd favourite) and it is a testament to the tight direction and pacing that one barely feels the two hours go by.

At its heart, Tandan's play is about finding oneself, be it through the larger-than-life heroes of the film world or by immersing oneself in a different culture and there is great empathy in the writing alongside moments of side-splitting comedy. Anecdotes about frequent power cuts in India and raucous Diwali festivities unfold alongside more sobering accounts of homesickness and personal anguish. In a moving sequence, Raghav describes how the Indian community at NUS was the most fractured on campus with numerous divisions and sub-divisions emerging between the students along linguistic and social lines.


The costumes - a cheeky hybrid of Indian and Western  elements - also hint at the cultural dislocation that students like Raghav endure and this is made even more apparent with the multi-racial cast who immerse themselves, with joyous abandon, into the most Indian of situations. There is a wistfulness that pervades the script about days long gone and the full-blooded drama of Jai and Veeru form a nice counterpoint to the world of "lukewarm emotions and virtual realities" that Raghav and his generation find themselves in.

Huzir and Shiv are alive to the old-fashioned nature of storytelling that animates the play and by coaxing fantastic performances from their actors and eschewing gaudy sets and design elements, they truly allow the narrative to shine. There is a lovely homage to the world of cinema with scene descriptions being read aloud, jump cuts and slow motion sequences and the scenes blend crisply into each other. In one of the play's funniest moments, rousing friendship anthem 'Yeh Dosti' from Sholay segues, without warning, into Wonder Girls' hit single 'Nobody' as the wide-eyed Raghav arrives in Singapore, dazzled by the cleanliness and "traffic so disciplined it was like a video game".

The Good, the Bad and the Sholay is a wild, infectious and ultimately heartwarming gaze into the world of heroes and villains and about finding one's own story in this messy game we call life. "Dishkyaaoon" is a word we hear frequently in the narrative, approximating the sound of a gun going off in Bollywood films. In Checkpoint's luminous revival, it is also the sound of a theatre company at the height of its powers, leaving smoke trailing gloriously in its wake.