There's an important social message at the heart of Neil LaBute's Fat Pig – do not judge people based on their appearance. Tom, a regular office professional, meets an interesting and sassy plus-sized librarian named Helen at a café, begins a relationship with her and finds himself at the receiving end of mockery from his co-workers when they learn of her large size. This simple four-hander is a great vehicle for a community theatre group like Yellow Chair Productions. Yet the evening is let down by weak acting, poor chemistry and haphazard stagecraft.

LaBute's play may not be sophisticated in terms of plot but there's honesty and empathy in his writing that shines through and speaks to the secret conformist in all of us. Yet things start off on the wrong note with the acting. Nicholas Bloodworth is passable enough as Tom but spends most of the play looking like he is suffering from a mild headache. Fat Pig may seem to be all about Helen, the plus-sized heroine, but the key character here is Tom and his internal struggle at trying to reconcile himself with society's image of his girlfriend. There's a certain level of depth and nuance that the role demands, and without this, the character feels completely dull and one-dimensional. Bloodworth never quite manages to convey this and his performance is disappointingly flat. 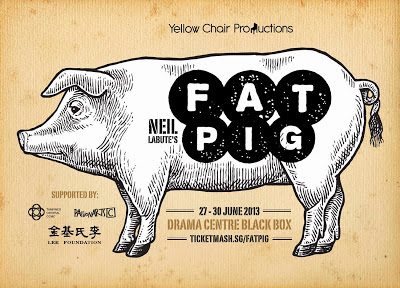 As Tom's obnoxious and crass best friend Carter, Stephane Brusa gives the play its few moments of much-needed physical comedy and is generally a pleasure to watch; his French accent and lanky frame provide an entertaining visual and aural counterpoint to Tom. Vanessa Vanderstraaten cuts an impressive figure as accounts executive Jeannie, Tom's sexy ex-girlfriend who suffers a major blow to her self-esteem when she discovers that Tom has left her for a fat girl. There is, however, a touch too much melodrama in some of her scenes that gives off strong soap opera vibes.

The weakest link in the cast here is Sheril Amira. She lacks the spunkiness and sparkling self-possession demanded of Helen, and it's almost impossible to see what would attract a guy like Tom to her in the very first place. Sheril and Bloodworth display hardly any chemistry together and the play moves very quickly from being a quirky romance to plain painful. I felt myself holding my breath throughout most of the supremely awkward first scene; I suspect I wasn't the only one. It's a pity because LaBute constructs this first scene brilliantly, with Tom being irresistibly drawn to Helen's self-deprecating nature and joie de vivre.

There's also the whole question of size. For a play that deals so overtly with societal perceptions of body image, it's crucial to have an actress who can conceivably be regarded as fat. A slightly plump actress just does not cut it – it makes Carter's snide, politically incorrect jibes seem entirely unjustified. I am sympathetic to the difficulty of finding a suitably sized actress in Singapore for the role but this only begs the question of why this play was chosen in the first place.

Quite apart from the patchy acting, the other hugely distracting aspect of this production is the set. Director Mohamed Shailfulbahri and set designer Weng Loong have come up with the idea of framing each piece of furniture (the dining table, the sofa, a bench) with pieces of DIY white cardboard dividers. A simple lighting change would have done the trick and I'm not sure why this flimsy white "wall" was needed to convince us that we were in another space. Scene transitions are also extremely laboured and slow down the pace.

Additionally, direction seems to be lacking in many of the scenes where the actors do not quite know what to do. It's particularly unfortunate that the final scene – a sad exchange between Helen and Tom at a beach party – was left hanging awkwardly. It took audience members a good minute or two to work out that the play had ended.

Yellow Chair Productions did a fairly competent job with Haresh Sharma's Off Centre last year so it's hard to understand such a major decline in terms of quality. The earnestness and commitment of the production team is evident, and with better casting and a stronger directorial vision to wrinkle out the play's subtleties, this had the potential to be a fun, tender and ultimately moving production. One can only hope that they continue honing their craft on future projects.