Singapore, 2023. The Dream Squad bursts into an MRT train to conduct a routine check on the dreams of its passengers. Citizens are only allowed to have a nationally prescribed list of aspirations such as education, productivity and financial success. Ethan, a teenager with bold dreams, sets off the radar and is sentenced to a concentration camp for wayward youths.

The SLO has made an interesting choice with Pursuant, an original Singaporean musical influenced by operatic elements. In this dystopian “SingaCorp”, a nation populated by corporate automatons, life is all about conformity and mental discipline, and any deviation from the norm is frowned upon. 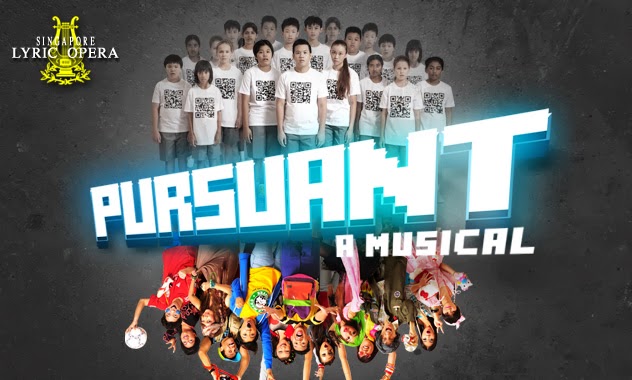 Director and librettist Jonathan Lim peppers the show with his trademark Chestnuts brand of humour and cheeky cultural references. Unfortunately, Lim’s wafer-thin plot barely stretches to fill two hours of stage time and some editing is needed to improve the pace and energy. It seems implausible how easily Ethan and his posse infiltrate the austere, regimented world of SingaCorp and the resolution, involving a mysterious Old Man who is revealed to have banned dreaming, feels a little too neat.

One also wishes that more effort had been made with the set, a decidedly uninspired collection of white boxes and multimedia projections. Composer Chen Zhangyi’s music is jaunty but otherwise mostly sounds like a TV game show.

Lead actor Windson Liong has decent vocals as Ethan but felt rather plodding and awkward. Others, like Darius Tan, tried too hard to milk the laughs.

There was, however, good support from the local theatre contingent, notably Candice de Rosario who stood out as a robotic Permanent Secretary, Nora Samosir as the tart but good-natured Cardboard Box Auntie and Jonathan Lim as the hippie Can Crushing Uncle, the godfather of an underground resistance group that rescues Ethan.

Being a youth showcase, Pursuant draws heavily on the talents of the SLO Children’s Choir. The 20-odd kids provided lots of colour, but in a way that screamed school variety show where everyone was allowed their moment of fame. A tighter cast would have made the action less unwieldy.

It may not always hit the mark but by drumming in the importance of thinking outside the box and keeping one’s imagination alive, Pursuant has just enough going to give us some much needed food for thought.