Rosencrantz and Guildenstern Are Dead


Tom Stoppard's first commercial success still sparkles after nearly half a century. Playing with the idea that "every exit is an entry somewhere else", it inverts the events in Shakespeare's Hamlet, placing the two eponymous minor characters in the leading roles and the main characters of Hamlet in the periphery, imaginatively reconstructing scenes of the play as seen from the duo's eyes.

Trevor Nunn's production, a Chichester Festival Theatre transfer and the second instalment in his debut season as Artistic Director of the Theatre Royal Haymarket, stars Samuel Barnett (Rosencrantz) and Jamie Parker (Guildenstern) from the acclaimed stage and film version of Bennett's The History Boys. Nunn's production starts with a nod to Beckett, presenting Rosencrantz and Guildenstern perched on their rucksacks under a withered tree in a tableau reminiscent of Vladmir and Estragon in Waiting for Godot. However, apart from this resonant image of stasis, Nunn's characteristic stark and minimalist staging strikes an uncertain note and with the exception of the beautifully realized final scene on a ship, he does not appear to have articulated a particular take on Stoppard's play. The set and staging for the most part seem curiously inchoate, being little more than a series of corridors upstage and wooden slats in the ceiling. The rest is drab, grey and empty.

Nunn's production gives both Rosencrantz and Guildenstern distinct personalities rather than the classic portrayal of them as two halves of a single character. Parker's Guildenstern is the insistent philosophiser prattling on endlessly with a self-righteous indignation while Barnett's Rosencrantz is the placid, more naive companion who is perfectly happy to amuse himself with coin tricks rather than ruminate about their dubious circumstances. Barnett's slightly camp delivery also suggests a latent sexual chemistry amongst the pair; they swing hands, hug and seem in many respects like an old married couple. One wonders if this may well be another factor that increases their isolation from all but each other. Barnett and Parker have an easy camaraderie in their banter and are both competent and likeable. Their performances however lack the assurance and polish one expects from more than a year's experience of working together on both stage and screen. Parker's verbose expostulations at the beginning rapidly begin to grate and Barnett strikes one as being rather gormless. I somehow suspected that the dynamics between them would have emerged a lot fresher at Chichester where the production premièred, without the strains of a West End schedule nearing the end of its run.

The arrival of the travelling band of actors spices things up. Chris Andrew Mellon as the Player does an outstanding job of conjuring up the sordid world of Renaissance entertainment with a mixture of weary resignation and lascivious relish: "I can do you blood and love without rhetoric, and I can do you blood and rhetoric without love, and I can do you all three concurrent or consecutive, but I can't do you love and rhetoric without blood. Blood is compulsory - they're all blood, you see." Mellon's Player is brash and flamboyant and a good counterpoint to the rather reined-in, morally upright stance taken by the two men. 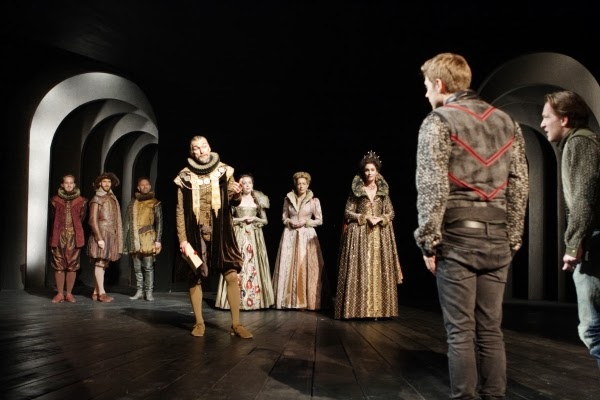 As underscored by the title, death is a constant, looming presence. We start the play knowing what happens to these two young men even though they remain clueless for the most part as to their role in the grand scheme of things. As Rosencrantz muses about the idea of "lying in a box" and what it would be like to be dead, the cruel irony of the fate's determinism versus one's freedom of choice is driven home. It is poignant that the dumb-show presented by the players, which depicts the two men's eventual death, seems to engender nothing more than mild puzzlement on their part, the tragedy bleeding into the comedy.

The supporting actors from the Hamlet scenes are strong and there are fine performances by Jack Hawkins as an impetuous Hamlet, Fiona Gillies as Gertrude and James Simmons as an regal and imperious Claudius. Fotini Dimou's excellent costume design also contrasts the lavish period outfits of the Hamlet characters against the two courtiers' fusion garb of Renaissance-style doublets and modern jeans, suggesting that they are individuals trapped between two worlds - ones who both belong and not quite belong. And even though we already know the ending, we still feel and a pang of sadness when we hear, once again, that "Rosencrantz and Guildenstern are dead".