The Last Temptation of Stamford Raffles


A headliner of the Singapore Theatre Festival 2008 with its bold and catchy title, local poet and playwright Ng Yi-Sheng's The Last Temptation of Stamford Raffles casts an irreverent eye over the history of Singapore's founder, Sir Stamford Raffles, providing an entertaining and nuanced exposé of his life.

The Last Temptation is a witty reconstruction of the last 12 hours in the life of Raffles. Traditionally revered as a symbol of order and harmony, Raffles is (quite literally) brought down from his pedestal, the tumultous and chaotic events in his life being exposed. By turns haunting and hilarious, Ng's script peeks behind the veneer of Raffles, depicting him as an articulate, supremely confident adventurer whose noble intentions to develop a little-known fishing village came at the expense of immense personal and emotional sacrifice.

Under the assured if rather heavy-handed direction of Christina Sergeant, the play opens in 1826, with Raffles's second wife Sophia (Claire Devine) narrating the final hours of Raffles's life for his biography as he lies in bed fitfully. As he wakes, Raffles is confronted by an enormous poetry-spouting Rafflesia luring him with tales of his past and a pristine white statue of himself (much like the one currently standing by the Singapore River) telling him about the future of Singapore and how much it has progressed. 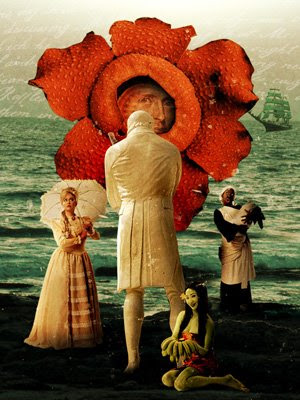 The rest of this rather tight 75 min play navigates through both climactic and little-known events in Raffles's life - his birth on a ship off the coast of Jamaica, his arrival in Singapore with his first wife and sister, his invaluable research destroyed in a fire and his altercation with Farquhar over the governance of the island. While the script reads like a history textbook in places, it invests the character of Raffles with a hitherto unexplored pathos that makes him more human than the rather one-sided accounts of his colonial prowess. In a poignant scene where Raffles discovers that Singapore has descended into a pit of vice and corruption in his absence, he yells at Farquhar, "pulangkan anak saya" (return me my child). Having lost most of his children to tropical diseases, this outburst emerges all the more sadly ironic; we see in Raffles a father desperate not to let go of his country-child, a man trying to achieve a mark in the world.

The Mumbai-born, London-trained Rehaan Engineer gives a masterful performance as Raffles, leaping effortlessly from the langour of a bedridden man to the boundless, almost unbridled energy of an ambitious colonialist. His casting is perfect and chemistry with the other actors excellent. Ian Tan and Patricia Toh, as the talking statue and Rafflesia respectively, are largely competent though one gets the sense that they are trying too hard to hit an appropriate punch-line. It does not help that Ng makes the statue overly preachy and gratuitously laces every other line of the Rafflesia with Shakespeare. Their antics, while deliberately exaggerated, seem overly stagey and tend to descend into farce, detracting from the smooth flow of the plot. Amongst the supporting cast, Candice de Rozario dazzles with her skilful handling of a wide assortment of comic roles, her portrayal of a chanting Jamaican midwife being especially entertaining.

The set design by Wong Chee Wai and lighting by James Tan deserve particular praise for incorporating the play's blend of fantasy and reality. Translucent drapes are employed to convey additional background scenes by the clever use of silhouettes. The larger-than-life bed is swiftly transformed into a ship by the addition of a railing and a wardrobe turns effortlessly into a door. The asymmetrical bed with tropical fruit designs that acts as the centerpiece of the set effectively conjures up the tussle between reason and passion, order and chaos.

The Last Temptation is a memorable play that has been carefully researched by Ng and written with a love of language that only a poet can provide. Yet ultimately, for all its personal tragedy and emotional tumult, we are somehow unable to connect with the story of Raffles. Perhaps the script tries too hard with all the farcical comedy and symbolic undertones (I detected veiled biblical references), perhaps it appears too smooth to be earnest. What The Last Temptation does however acheive is a more genuine depiction of one of Singapore's most revered historical figures, one that is far more compelling and thought-provoking than your average history book.