based on the novel by Charlotte Brontë
adapted for the stage by Polly Teale
Shared Experience
Trafalgar Studios, London

Fans of Charlotte Brontë’s classic 1847 novel will not be disappointed by this riveting stage adaptation by Polly Teale, joint Artistic Director of Shared Experience, with an intuitive psychological reading that adds a fresh perspective to the text.


Teale, who also directs, opts for a minimalist, black-box setting: a dark winding staircase leading up to a small room at the centerpiece of an equally darkened stage. The intimate atmosphere immediately draws the audience into the play which is told through the eyes of the orphan Jane. 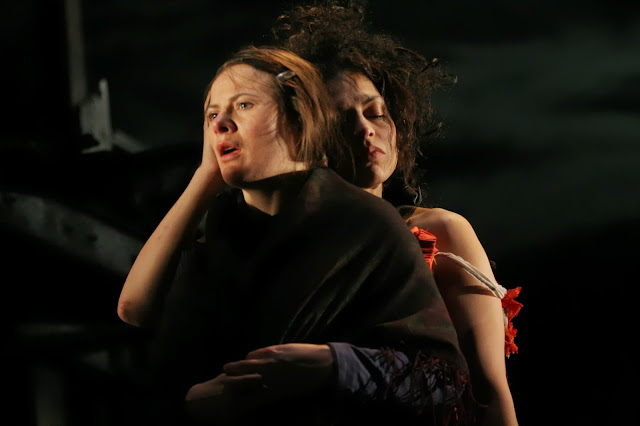 Teale's adaptation stands out for physicalizing a theory that has been espoused by many literary commentators: Bertha Jorkins (Myriam Acharki), the wild and insane wife of Mr Rochester locked in the attic, is the alter ego of Jane. From the beginning of the play, the stoic young Jane is contrasted with Bertha, a vibrant, sensuous girl draped in colourful clothes who delights in tales of foreign lands. When admonished, Jane remains silent but Bertha writhes and thrashes around in a dizzying frenzy. In an early scene, the young Jane comes face to face with Bertha when locked in a room by her aunt, a scene that is paralleled by her adult counterpart being confronted with the haunting presence of "the other Mrs Rochester" on her wedding day. It's a powerful image that physically manifests the madness that confronts Jane both within and without.

While Brontë’s novel is peopled by a vast and various host of characters, Teale makes use of an ensemble of just seven actors who take on a multitude of roles. Octavia Walters shines as young Jane’s sickly friend Helen Burns in Lowood School and later as the impossibly bouncy, French-speaking Annette. The male characters even double up as animals; John Lightbody's amusing turn as Pilot the dog and Rochester's horse contribute to the play's comedy and charming physicality.

Monica Dolan turns in a flawless performance as Jane, that "poor, obscure, plain and little" girl who nonetheless speaks so powerfully to us. Her superbly nuanced performance veers effortlessly from bold impassivity to adorable tenderness and tortured emotionality. One cannot help but laugh and cry with Dolan's Jane as she wades through the vicissitudes of life.

Teale maintains razor-sharp control over the material direction. Despite the pared-down staging and nearly three-hour length, even the most momentous of scenes lose none of their poignancy and pathos. A production that does full justice to the beauty of the novel.